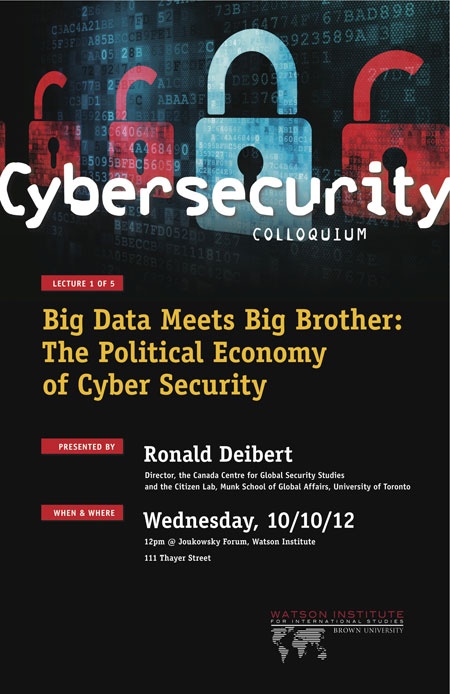 "Big Data Meets Big Brother: The Political Economy of Cyber Security," with Ronald Deibert, Professor of Political Science, and Director of the Canada Centre for Global Security Studies and the Citizen Lab at the Munk School of Global Affairs, University of Toronto.

Gradually and almost imperceptibly, we have immersed ourselves in a global hypermedia environment. This environment increasingly contains everything we do: we work, we play, we organize within it. Our lives have been, in essence, turned inside out and dispersed in endless ethereal clouds - multi-verses - that follow us around in extra dimensionality. “Big Data” refers to the endless digital grains of sand we produce as we move, think and act. Internet Service Providers, web hosting companies, cloud and mobile providers, massive telecommunications and financial companies, and a host of new digital market organisms digest and process unimaginably large volumes of information about each and every one of us. Unsurprisingly, a massive cyber industrial complex has sprouted around the commercial exploitation of these multi-verses.

To manoeuvre in the hypermedia environment, states require increasingly specialized products and services, which in turn has opened up an enormous market opportunity tapping into lucrative defense budgets. Cold War behemoths, like Boeing and Northrup Grunman, are turning to cyber security, as are a bewildering and seemingly endless array of niche companies. Their wares are peddled at obscure international trade shows typically restricted to law enforcement, intelligence and the military. Computer network exploitation, deep packet inspection, social networking mapping, cell phone tracking, geolocational tracking: all manifestations of a new muscular exercise of state power in cyberspace.

As policy makers are given the products and services to do things that they never before even imagined, an epistemic shift occurs around the framework for rights and governance. What was inconceivable is increasingly considered routine. Lawmakers now justify radical changes to basic checks and balances on state surveillance as part of a supposed necessity of the digital age. Not too long ago, Internet pundits mocked slow-footed authoritarian regimes and predicted their demise. Today, they are prime customers for the tradecraft of cyberspace controls. Big Data meets Big Brother.