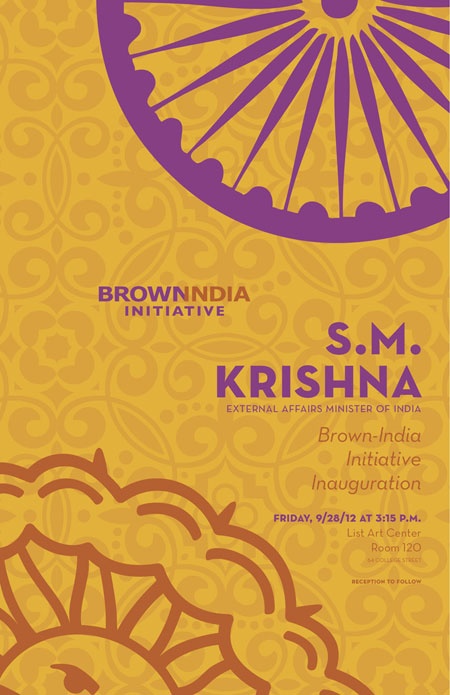 S.M. Krishna, External Affairs Minister of India, will give the inagural talk for the Brown-India Initiative.

Born on 1 May 1932, Shri S.M. Krishna graduated from Maharaja’s College, Mysore, and went on to obtain a law degree from the Government Law College, Bangalore. Later he studied at the Southern Methodist University, Dallas, USA and also at George Washington University as a Fulbright scholar.

Back in India, he worked as a Professor of International Law in Renukacharya Law College, Bangalore. He was elected to the Karnataka Legislative Assembly in 1962 and made his debut in Parliament in 1968, to become a Member of the fourth Lok Sabha (People’s House).

He was re-elected to the fifth Lok Sabha, but preferred to return to State Politics in 1972, when he was elected to the Legislative Council and inducted as Minister for ‘Commerce, Industries and Parliamentary Affairs’, a charge he held till 1977.

He became the Speaker of the Karnataka Legislative Assembly in 1989, and held the post till 1992, when he was elected as Deputy Chief Minister of Karnataka.

He was elected to Rajya Sabha in 1996 (Upper House of Parliament), and was a member till October 1999.

He was elected as the Chief Minister of Karnataka in October 1999 and served till May 2004.

Mr. Krishna assumed office of Governor of Maharashtra in December 2004 and remained in the post till March 2008. He was re-elected as Member of the Rajya Sabha on 19 June 2008.

He assumed charge as the External Affairs Minister on 23 May 2009.

Widely traveled, Mr. Krishna was a Member of the Indian delegation to the United Nations in 1982, and a delegate to the Commonwealth Parliamentary Seminar at Westminster, UK in 1990.