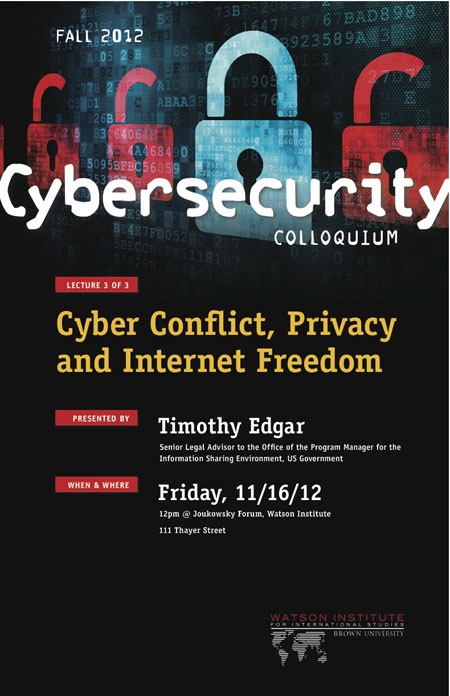 "Cyber Conflict, Privacy and Internet Freedom," with Timothy Edgar, senior legal advisor to the Office of the Program Manager for the Information Sharing Environment (PM-ISE).

Cyber conflict and security problems pose unique challenges for governments, citizens, and the future of the Internet. The U.S. Secretary of State has announced that the "freedom to connect" is an aspect of fundamental human rights, even as the United States has established a new military command for cyberspace at Ft. Meade, home of the National Security Agency (NSA). A growing list of countries have adopted Internet filtering practices, and such practices are being debated even in democratic countries. Proposals to require security standards for some critical private industries, and to authorize information sharing "notwithstanding" existing laws, remain mired in controversy over fears they will stifle innovation and compromise privacy and civil liberties. This talk attempts to bridge the language gap between computer scientists, lawyers, and ordinary citizens. How can we prepare ourselves for escalating cyber insecurity, or even cyber "war," while upholding fundamental values?