After Oslo: Critical Conversations on Palestine/Israel 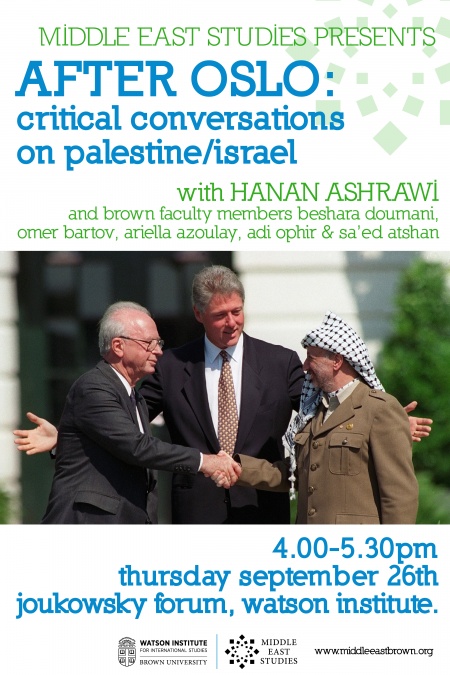 September 2013 brings the 20th anniversary of the Oslo Peace Accords. The agreement signed between the Israeli government of Yitzhak Rabin and Palestinian Liberation Organization Chairman Yasser Arafat marked the creation of the Palestinian Authority. However, the Oslo Accords did not settle issues of statehood, borders, refugees, or settlements.

To mark this historic moment, Middle East Studies has organized a year-long series of events related to this issue. The events will explore such questions as What is the “Peace Process?”  What changed on the ground? And what are the possible futures of the Palestinian-Israeli conflict?

“After Oslo” will be an interactive discussion on the Palestinian-Israeli conflict featuring a distinguished panel of scholars composed of Dr. Hanan Ashrawi, a key participant in the talks, and Brown faculty members Beshara Doumani, Omer Bartov, Ariella Azoulay, Adi Ophir, and Sa’ed Atshan.