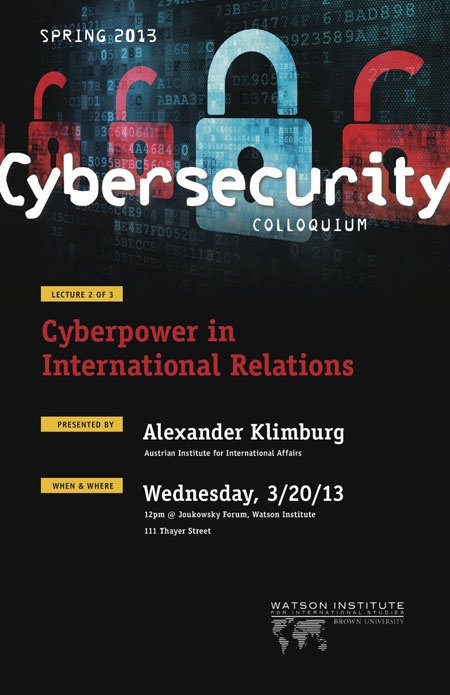 "Cyberpower and National Cyber Security in International Relations," with Alexander Klimburg, Fellow and Senior Adviser at the Austrian Institute for International Affairs.

The rise of cyberspace as a field of human endeavour is probably nothing less than one of the most significant developments in world history. Cyberspace already directly impacts every facet of human existence including economic, social, cultural and political developments, and the rate of change is not likely to stop anytime soon. However, the socio-political answers to the questions posed by the rise of cyberspace often significantly lag behind the rate of technological change. One of the fields most challenged by this development is that of “national security”.

The term “National Cyber Security” is increasingly used when discussing the overall security challenges nations-states face in cyberspace, but it is seldom defined. Overall, the individual national context will determine the specific definitions and approaches governments will take when seeking to balance the social-economic gains of information technology with the new security risks that accompany it. Understanding the specific national context, therefore, is key to developing an appropriate national strategy.

“Cyberpower” is another term often used to describe the interplay of cyber-related factors in state-to-state relationships. This term is even less understood then the notion of “National Cyber Security”, and much more malleable. Traditionally, “cyberpower” is usually understood within a national security context, but it could go beyond on that, to include economic or cultural factors not usually understood as falling within a “security” mandate. While this could mean that “cyberpower” could also have none-security connotations the opposite is also true – that terms such as cyberpower are directly leading to the “securitization” of a number of fields that previous were not considered directly part of a national security.

Alexander Klimburg is a Fellow and Senior Adviser at the Austrian Institute for International Affairs. Since joining the Institute in October 2006, Mr. Klimburg has acted as an advisor to a number of different governments and international organizations on various issues within cybersecurity, Critical Infrastructure Protection (CIP), and EU Common and Foreign Security Policy (CFSP). Mr. Klimburg has partaken in international and intergovernmental discussions, has acted as an advisor to the Austrian delegation at the OSCE, and has been a member of various national and EU-level policy and working groups. He is the principle author of a 2011 European Parliament study and the editor of the NATO-funded National Cyber Security Framework Manual. He regularly advises on national and European cybersecurity legislation.

Within cybersecurity, Mr Klimburg’s work has primarily been in the area of Information Security, Critical (Information) Infrastructure Protection, and researching the synthesis of different types of cybersecurity issues in exercising “cyberpower”. Mr Klimburg is particularly interested in the roles that non-state actors have within national security in general, and cybersecurity in particular.

Mr Klimburg is the author of a number of publications and is regularly consulted by national and international media. Previous to joining the institute, Mr Klimburg worked on ICT strategy issues in corporate finance and IT/strategy consulting in Europe and Asia, and holds degrees from the School of Oriental and African Studies and the London School of Economics and Political Science.