Amr Shalakany -- 'The first thing we do, let's kill all the lawyers': Liberalism and Revolution in Modern Egypt 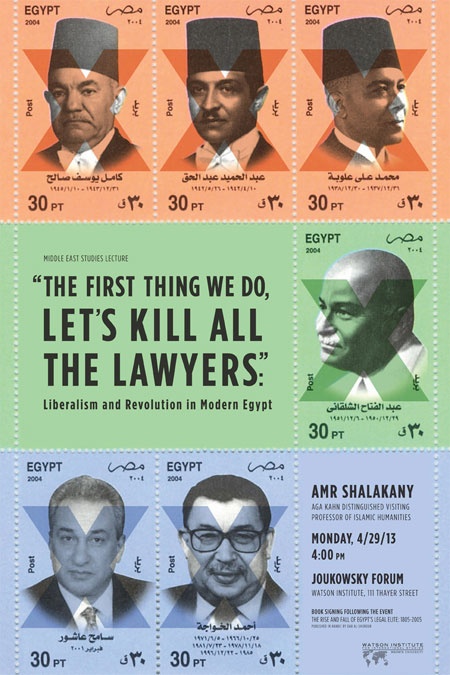 "'The first thing we do, let's kill all the lawyers': Liberalism and Revolution in Modern Egypt," with Amr Shalakany, Aga Khan Distinguished Visiting Professor of Islamic Humanities.

Of the many Arab Springs, revolution in Egypt stands out for its decidedly legalistic tone, from erupting over two years ago to present day. At stake are rule of law slogans on judicial independence and separation of powers, all suspiciously inspected for counter-revolutionary ploys. The Shakespearean call, to kill all the lawyers, has never been so palpable since Henry VI. And with it all rise old anxieties, over the emancipatory potentials of liberalism as ideology, and lawyers as its governing elite. Political battles are fought at court. Judges are enemies of the people. It all comes back: Can law and revolution be compatible?

The Rise and Fall of Egypt's Legal Elite: 1805-2005, is the title of Professor Shalakany's latest book, published in Arabic by Dar Al-Shorouk.

Amr Shalakany is Aga Khan Distinguished Visiting Professor of Islamic Humanities at Brown University for the Spring 2013 semester. He visits from Cairo, where Shalakany is Associate Professor of Law at the American University in Cairo (AUC), and founding director of the LL.M. Degree Program there. He holds a joint appointment at the Civil Law Dept of Cairo University Faculty of Law. Shalakany teaches in the areas of Comparative Private Law, Islamic Law, and Legal History. Before joining AUC, Shalakany was the Jeremiah Smith Junior Visiting Assistant Professor at Harvard Law School. Earlier, he served as legal advisor to the PLO Negotiations Support Unit in Ramallah, and taught at Birzeit University where he helped set up the Legal Aid Clinic at the Law Institute. He has also worked as a securities lawyer with the law firm of Baker & McKenzie in London. Shalakany received his Licence en droit and LL.M. degrees from Cairo University Faculty of Law, and LL.M. and S.J.D. degrees from Harvard Law School. He is admitted to the New York Bar.