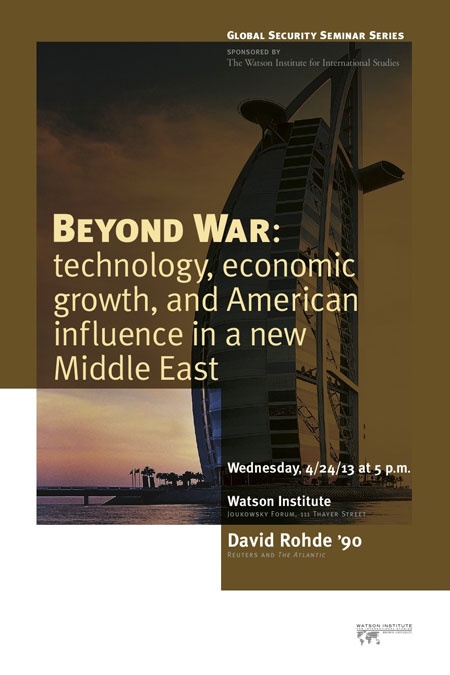 "Beyond War: Technology, Economic Growth, and American Influence in a New Middle East," a lecture and book signing with David Rohde '90.

David Rohde will discuss his new book, Beyond War: Technology, Economic Growth, and American Influence in a New Middle East (Viking; on sale March 11), and will be available for a book signing following the talk.

This book distills eleven years of expert reporting for The New York Times, Reuters, and The Atlantic Monthly into a clarion call for change. An incisive look at the evolving nature of war, Rohde exposes how a dysfunctional Washington squandered billions on contractors in Iraq and Afghanistan, neglected its true allies in the war on terror and failed to employ its most potent nonmilitary weapons: American consumerism, technology, and investment. Rohde then surveys post-Arab Spring Tunisia, Turkey, and Egypt, and finds a yearning for American technology, trade, and education. He argues that only Muslim moderates, not Americans, can eradicate militancy. For readers of Steve Coll, Tom Ricks, and Ahmed Rashid, Beyond War shows how the failed American effort to back moderate Muslims since 9/11 can be salvaged.

David Rohde is a columnist for Reuters and The Atlantic Monthly. A former reporter for The New York Times, he is a two-time winner of the Pulitzer Prize and the author, with Kristen Mulvihill, of A Rope and a Prayer: A Kidnapping from Two Sides and Endgame: The Betrayal and Fall of Srebrenica. He lives in New York City.