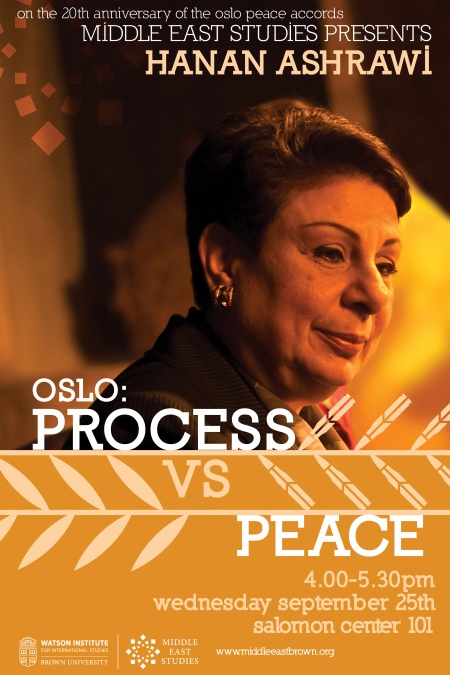 September 2013 brings the 20th anniversary of the Osle Peace Accords. The agreement signed between the Israeli government of Yitzhak Rabin and Palestinian Liberation Organization Chairman Yasser Arafat marked the creation of the Palestinian Authority. However, the Oslo Accords did not settle issues of statehood, borders, refugees, or settlements.

To mark this historic moment, Middle East Studies has organized a year-long series of events related to this issue. The events will explore such questions as What is the “Peace Process?”  What changed on the ground? And what are the possible futures of the Palestinian-Israeli conflict?

Dr. Hanan Ashrawi, a key participant at the talks, will kick off the series of events.

On the occasion of the 20th anniversary of the signing of the Declaration of Principles (DOP) on the White House lawn, Dr. Ashrawi will address the major structural, procedural and substantive flaws inherent in the "process" launched at that date and how the "process" took over to displace peace as an objective. The role of the third party, as well as suggestions for rectification, will be addressed.

A civil society activist, in 1999 Dr. Ashrawi founded MIFTAH, the Palestinian Initiative for the Promotion of Global Dialogue and Democracy, and continues to serve as head of its Board of Directors. In the same year, she founded the National Coalition for Accountability and Integrity (AMAN). She is the founder of the Independent Commission for Human Rights (ICHR) and has served as its Commissioner since 1994. Also an academic, Dr. Ashrawi founded and chaired the Department of English at Birzeit University and became dean of the Faculty of Arts. Her work has garnered her a number of honorary degrees and distinguished awards from various international and local organizations.

Co-sponsored by the Bigelow and Starr Lectureship Funds.