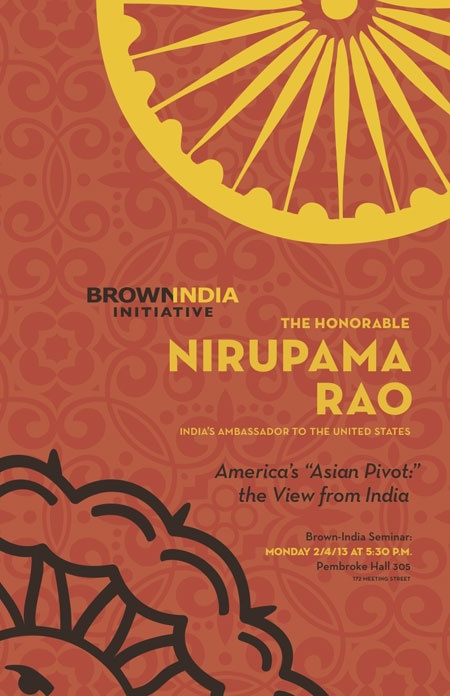 The Honorable Nirupama Rao, Indian Ambassador to the US
Chaired by President Christina Paxson

Mrs. Nirupama Rao assumed her responsibilities as Ambassador of India to the United States in September 2011.

On completion of her University studies, and with an M.A. in English Literature, she joined the Indian Foreign Service in 1973. In a diplomatic career spanning over three decades, she served in various world capitals, including Washington, Beijing and Moscow. She acquired extensive experience in India-China relations, having served in the East Asia Division of the Ministry at policy level capacities for several years, and later serving as India's first woman Ambassador to China from 2006 to 2009. Her other ambassadorial assignments include Peru and Bolivia, and Sri Lanka (where also she was India's first woman High Commissioner).

Ms. Rao has served previously in Washington in the capacity of Minister for Press and Cultural Affairs at the Indian Embassy from 1993 to 1995. She has also served in Moscow as Deputy Chief of Mission at her country's embassy there, in the late nineties. On return to New Delhi, she was designated as Spokesperson of the Ministry of External Affairs in 2001, the first woman Indian Foreign Service officer to hold this post.

On completion of her ambassadorial tenures in Sri Lanka and in China, she was appointed Foreign Secretary, the highest office in the Indian Foreign Service, where she served a two-year term till end-July 2011.

Ambassador Rao was a Fellow at the Centre for International Affairs (now the Weatherhead Centre) at Harvard University in the early 1990s. She was also a Distinguished International Executive in Residence at the University of Maryland at College Park in 1999-2000.

Ambassador Rao was conferred the Degree of Doctor of Letters (honoris causa) by Pondicherry University at its Annual Convocation on 19 May 2012.

Ambassador Rao is married to Sudhakar Rao, a distinguished civil servant and former member of the Indian Administrative Service who retired as the Chief Secretary of the State Government of Karnataka. They have two sons, Nikhilesh and Kartikeya.