Rabab El-Mahdi ─ Challenges to Democratization in the Arab Uprisings 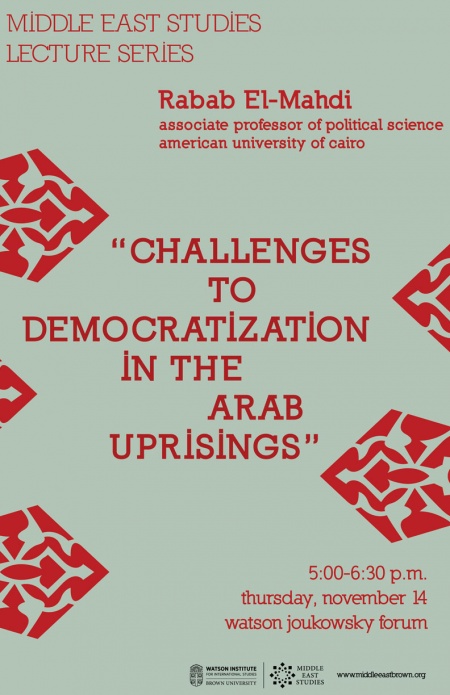 Looking at the tumultuous path of the Arab uprisings since 2011, El-Mahdi will examine five main challenges that continue to face the Arab people in their aspiration towards freedom and justice. Historical legacies, positioning within the global economy, regional dynamics, and governmentality are among those persisting challenges. Hence, understanding the current Arab uprisings as mere transitions to democracy in the procedural sense, under-estimates the complexity of on-going changes in the region and accordingly falls victim to pre-existing neo-orientalist binaries about Arab ‘exceptionalism’. While the talk underscores the differences between different countries undergoing changes in the region, it deduces some common patterns within the recent wave of revolts.

Rabab El-Mahdi joined and co-founded a number of opposition groups in Egypt. She is associate professor of political science at the American University in Cairo and co-editor of Egypt: The Moment of Change (Zed Press, 2009). She works on social movements and mobilization, including women, labor and political Islam. She is the author of a number of publications including, most recently: Empowered Participation or Political Manipulation? Civil Society and the State in Egypt and Bolivia (Brill 2011), "Orientalizing the Egyptian Revolution", Jadaliyya (April 2011),"Does Political Islam Impede Gender‐Based Mobilization? The Case of Egypt" Totalitarian Movements and Political Religions (December 2010),"Working Class, Youth, and the Revolution" in Taking to the Streets (Ed. Ellen Lust) 2013, and "Women in the Revolution" (with Lila Abou Lughud) Feminist Studies, January 2012.

El-Mahdi is a frequent commentator on AJE, BBC, CNN, ABC and writes op-eds for both Egyptian and international newspapers.