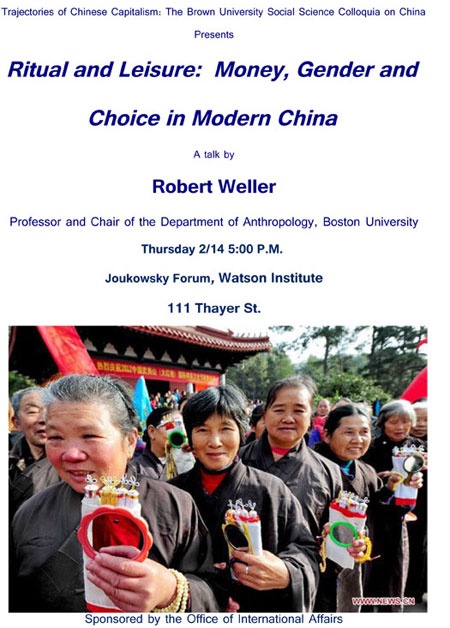 "Ritual and Leisure: Money, Gender and Choice in Modern China," with Robert Weller

“Leisure” is a frame that does not exist for all peoples, places and times, but it becomes increasingly important in China’s twentieth century. This talk explores two specific hypotheses about leisure as they may relate to ritual performance—that a gift economy predominates in contrast to the market economy of daily life, and that women have a greater role than in most other spheres. It suggests that both the gift economy and the role of women have grown significantly over the course of the twentieth century, and that while religion before then may not have fully fit into a frame of leisure, it has increasingly come to do so over the past several decades.

Robert Weller is Professor and Chair of Anthropology at Boston University and Research Associate at the Institute on Culture, Religion and World Affairs there. Weller’s work concentrates on China and Taiwan in comparative perspective. His actual research topics, however, are eclectic—running from ghosts to politics, rebellions to landscape paintings. Perhaps what unites everything is an interest in finding the limits to authority in all its settings. Weller’s earliest work began with the problem of religious meaning and authority. A second broad area of interest has been the problem of culture change in its global context, with all its flows and stoppages, appropriations and resistances. Weller's major research endeavor right now is a more theoretical exploration of ritual. His latest book, Ritual and Its Consequences (co-authored with A. Seligman, M. Puett, and B. Simon) argues that all societies have a tension between a ritual aspect (what you do makes you who you are) and a sincere aspect (what you do is only the reflection of who you are). Modernity, it argues, has embraced the sincere side in a way that is historically unusual and that creates inherent social problems. Weller and his colleagues are currently working toward another volume that will think more about problems of ambiguity, boundaries, and empathy, in part as they relate to ritual.