Ruby Lal -- Coming of Age in Nineteenth-Century India: The Girl-Child and the Art of Playfulness 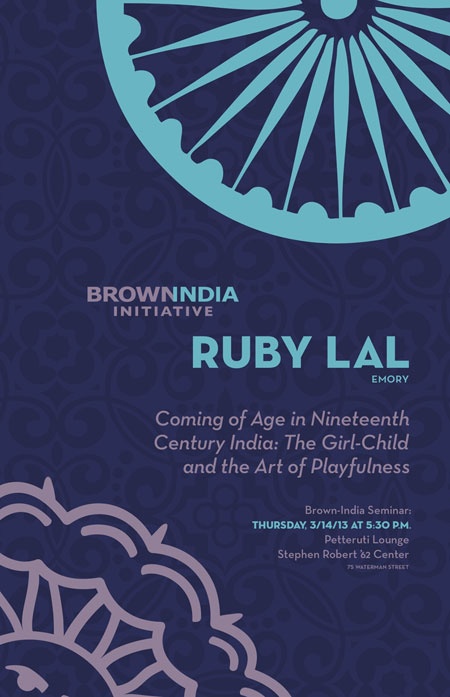 “Coming of Age in Nineteenth-Century India: The Girl-Child and the Art of Playfulness,” with Ruby Lal, Emory University.

Ruby Lal is Associate Professor in the Department of Middle Eastern and South Asian Studies at Emory University, Atlanta. She taught earlier at the Johns Hopkins University, in History and Anthropology, and served as Associate Director of the Program for the Study of Women, Gender and Sexuality. She received her B.A., M.A. and M.Phil in History from the University of Delhi, and D.Phil. from the University of Oxford, UK. She has written extensively on women and gender relations in Islamic societies in the precolonial and colonial world. She is the author of Domesticity and Power in the Early Mughal World (Cambridge University Press, New York, 2005), which won much acclaim, including more than fifteen reviews in major international journals and magazines, such as The New York Review of Books, The Economic and Political Weekly, Revue Historique, and The Times Literary Supplement. Her forthcoming book is entitled, Coming of Age in Nineteenth Century India: The Girl-Child and the Art of Playfulness (Cambridge University Press, New York, 2013). In addition to numerous academic articles, and political commentaries, she has also published a couple of short-stories and is revising her collection, Rubble and Other Stories. She is currently finalizing a narrative history of Mughal Empress Nur Jahan, entitled, Nur Jahan, Uncrowned Empress (W.W. Norton, 2014).