Two Who Dared: The Sharps' War 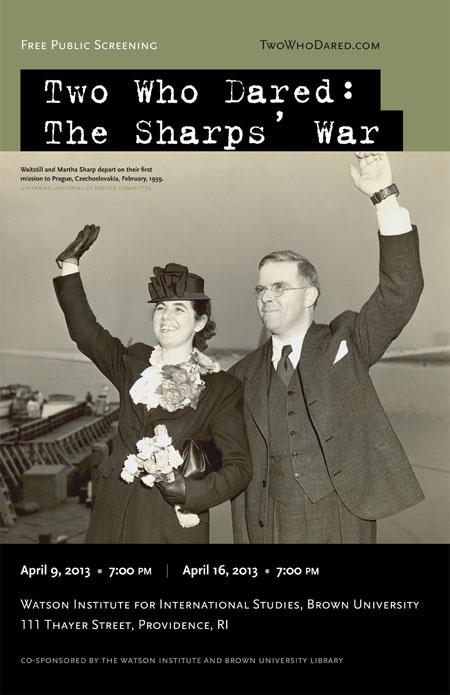 In commemoration of Yom HaShoah, Holocaust Remembrance Day, free public screenings of the documentary Two Who Dared: The Sharps’ War, will be held on April 9 and April 16 at 7 p.m. These screenings are part of a worldwide premiere occurring simultaneously at community churches, synagogues, theaters and schools.
Two Who Dared: The Sharps’ War, tells the story of a Unitarian minister, Waitstill Sharp and his wife Martha, Pembroke class of 1926, who, just days prior to the Nazi invasion of Czechoslovakia, left their young children in Wellesley, Massachusetts to help save Jewish children being persecuted in Eastern Europe. The film was directed by Artemis Joukowsky III (P’14, P’16), the Sharps’ grandson.
The film will open in New England with a screening hosted by the United States Holocaust Memorial Museum at the Boston Public Library on March 13. Over 50 public screenings will follow April 7-18, 2013 at venues around the world, including Israel, France, London, Toronto, LA, and NYC.
Brown University will stream a 30-minute educational version of the film online for 48 hours from 5 p.m. on April 19 through 8 a.m. on April 22. For more information on the streaming, visit http://www.watsoninstitute.org/twowhodared.
For more information on elsewhere screening times or to host a screening, visit http://twowhodared.com/.
Location: Joukowsky Forum, Watson Institute for International Studies, 111 Thayer Street