The 2014 Elections and India's New Government 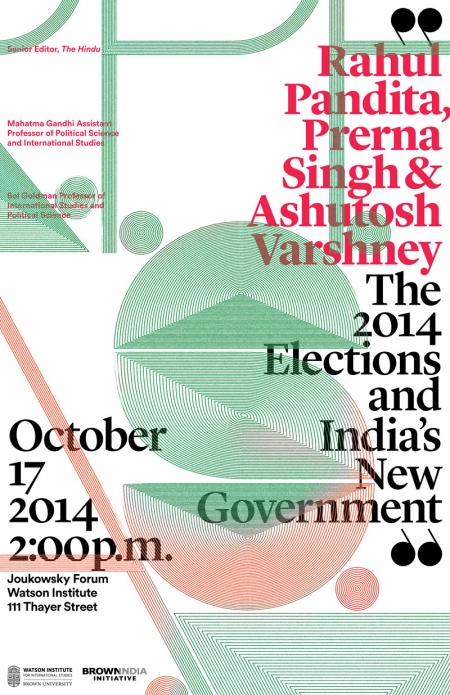 Rahul Pandita is a senior editor with The Hindu, one of India's leading newspapers. He is a conflict writer, who has reported extensively from war zones, including Iraq and Sri Lanka. His vast experience in reporting on India's Maoist insurgency has resulted in two books: Hello, Bastar: The Untold Story of India's Maoist Movement and The Absent State. He is also the author of the best-selling memoir on Kashmir, Our Moon has Blood Clots. He is the recipient of the International Red Cross Award for conflict reporting. He lives in a Delhi.

Prerna Singh is Mahatma Gandhi Assistant Professor of Political Science and International Studies and faculty fellow at the Watson Institute, and co-convenor of the Brown-Harvard-MIT Joint Seminar in South Asian Politics. She completed her PhD and MA from the Department of Politics at Princeton University, the tripos in social and political studies from Cambridge University, UK, and a BA (Honors) in economics from Delhi University. Prior to joining Brown, she taught in the Department of Government at Harvard University. She has also been a junior fellow at the Harvard Academy for International and Area Studies and held a pre-doctoral research fellowship at the Center for Advanced Study for India (CASI) at the University of Pennsylvania. Her book, Collective Identity and the Common Good: Subnationalism and Social Development in India, is forthcoming with Cambridge University Press. Her articles have been published in several journals, including Comparative Political Studies, Comparative Politics, World Development, and Studies in Comparative International Development. Singh is also the co-editor of the Handbook of Indian Politics (Routledge 2013).