21st Century Zion: America, Israel and the Challenges of a New Era 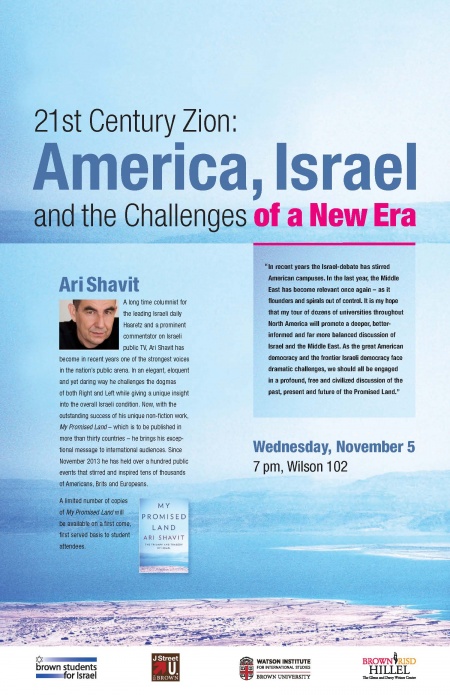 From Ari Shavit: "In recent years the Israel-debate has stirred American campuses. In the last year, the Middle East has become relevant once again — as it flounders and spirals out of control. It is my hope that my tour of dozens of universities throughout North America will promote a deeper, better-informed and far more balanced discussion of Israel and the Middle East. As the great American democracy and the frontier Israeli democracy face dramatic challenges, we should all be engaged in a profound, free and civilized discussion of the past, present and future of the Promised Land."

About Ari Shavit: A long time columnist for the leading Israeli daily Haaretz and a prominent commentator on Israeli public TV, Ari Shavit has become in recent years one of the strongest voices in the nation’s public arena. In an elegant, eloquent and yet daring way he challenges the dogmas of both Right and Left while giving a unique insight into the overall Israeli condition. Now, with the outstanding success of his unique non-fiction work, My Promised Land – which is to be published in more than thirty countries – he brings his exceptional message to international audiences. Since November 2013 he has held over a hundred public events that stirred and inspired tens of thousands of Americans, Brits and Europeans.

A limited number of copies of My Promised Land will be available on a first come, first served basis to student attendees.

Sponsored by Brown RISD Hillel, Brown Students for Israel, J Street U Brown, and the Watson Institute for International Studies.