Adam Michnik ─ The Traps of Democracy after Communism 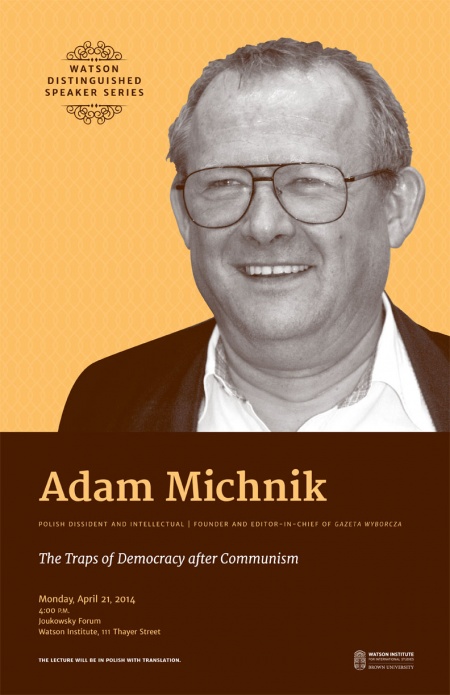 This lecture will be given in Polish with translation.

Adam Michnik is the founder and editor-in-chief of Gazeta Wyborcza, a daily often referred to as “The New York Times of Eastern Europe.” He is among Poland’s most prominent public figures, with a distinctive voice dedicated to dialogue, tolerance, and freedom. He was a leading figure in the 1968 student movement in Warsaw, a co-founder of KOR (Committee for the Defense of Workers) in 1976, and a prominent “Solidarity” activist in the 1980s.

Repeatedly detained by the Polish communist regime for his dissident activities, he spent a total of six years in prison between 1965 and 1986. In 1989, he participated in the Round Table Talks, which resulted in Poland’s nonviolent transition to democracy, and he served as a deputy in Poland’s first non-communist parliament (1989-1991).

He is the author of several books and countless essays, analyses, and interviews (his selected works comprise 10 volumes). His articles have been translated into many languages and appeared in Der Spiegel, Le Monde, Liberation, El Pais, Lettre International, New York Review of Books, The Washington Post, El Pais, and many other newspapers and periodicals. He has published five books in English, Letters from Prison (1987), The Church and the Left (1993), Letters from Freedom (1998), In Search of Lost Meaning (2011), and The Trouble with History (2013).

Michnik is the recipient of many prizes, honors, and honorary doctorates, including the Robert F. Kennedy Human Rights Award, The Erasmus Prize, The Francisco Cerecedo Journalist Prize, The Goethe Medal, The Grand Prince Giedymin Order, Chevalier de la Legion d'Honneur, and the Order of the White Eagle –the highest distinction attainable in Poland. He has honorary doctorates from the New School for Social Research in New York, the University of Minnesota, University of Michigan, and Connecticut College, among others. He regularly travels throughout the world, giving lectures on democracy, totalitarianism, and the paradoxes and dilemmas of contemporary politics.