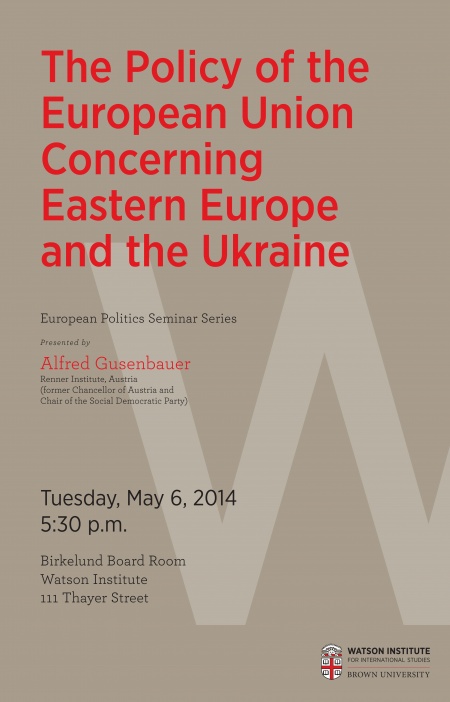 This European Politics Seminar will be presented by Alfred Gusenbauer

Alfred Gusenbauer was Chancellor of Austria from January 2007 to December 2008 and the leader of the Social Democratic Party of Austria (SPÖ) from 2000 to 2008.

Gusenbauer was born in Sankt Pölten in the state of Lower Austria. He studied political science, philosophy and jurisprudence at the University of Vienna, where he earned a doctorate in political science. He has spent his entire professional life in politics, either as an employee of the SPÖ or as a parliamentary representative. He was a senior research fellow in the economic policy department of the Lower Austria Chamber of Labour from 1990 to 1999.

In 1991, Gusenbauer was elected SPÖ chairman in Ybbs an der Donau and a member of the Lower Austria party executive. In the same year, he was elected to the Bundesrat, the upper house of the Austrian Parliament, as a deputy for Lower Austria. He was a member of the Austrian delegation to the parliamentary meeting of the Council of Europe in 1991 and was chairman of the social committee of the Council of Europe from 1995 to 1998.

In the Bundesrat, Gusenbauer was chairman of the Committee for Development Co-operation from 1996 to 1999. In 2000, he was elected leader of the SPÖ Group in the Bundesrat and also as Secretary-General of the SPÖ. Under his leadership in the 2002 elections, the SPÖ improved its vote and gained four seats, but failed to defeat the Austrian People’s Party (ÖVP) government of Chancellor Wolfgang Schüssel.

After the election, although the SPÖ was the largest single party, no one party was able to form a majority government, and a grand coalition between the ÖVP and the SPÖ was considered the most likely outcome. After prolonged negotiations, Gusenbauer became Chancellor on January 11, 2007 at the head of an SPÖ-ÖVP coalition.

Since stepping down as Chancellor, Mr Gusenbauer has served as a professor-at-large at the Brown University in Providence, Rhode Island, a Visiting Scholar at Harvard Law School, and a James Leitner fellow for Global Affairs at Columbia University in New York City. He has also served as president of the Renner Institut, president of the Austrian Institute for International Studies, president of the Austrian-Spanish Chamber of Commerce, member of the supervisory board of F.C.C. (Construction) – Spain and Alpine Construction and as CEO of Gusenbauer projektentwicklung und beteiligung Gmbh. Mr Gusenbauer holds an honorary doctorate from Hertzliah University of Israel and is Senator of the European Academy of Sciences. Since June 2009 he has chaired the Foundation for European Progressive Studies (FEPS) “Next Left” focus group.