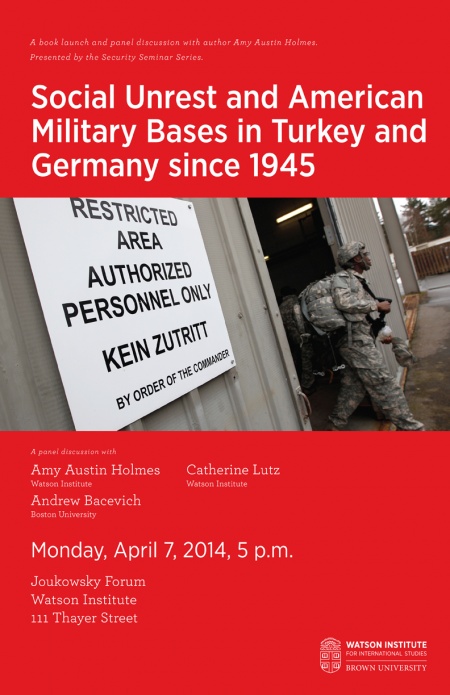 Amy Austin Holmes will discuss her new book, Social Unrest and American Military Bases in Turkey and Germany since 1945.

Over the past century, the United States has created a global network of military bases. While the force structure offers protection to U.S. allies, it maintains the threat of violence toward others, both creating and undermining security. Amy Austin Holmes argues that the relationship between the U.S. military presence and the non-U.S. citizens under its security umbrella is inherently contradictory. She suggests that the while the host population may be fully enfranchised citizens of their own government, they are at the same time disenfranchised vis-a-vis the U.S. presence. This study introduces the concept of the "protectariat" as they are defined not by their relationship to the means of production, but rather by their relationship to the means of violence. Focusing on Germany and Turkey, Holmes finds remarkable parallels in the types of social protest that occurred in both countries, particularly non-violent civil disobedience, labor strikes of base workers, violent attacks and kidnappings, and opposition parties in the parliaments.