Ashis Nandy ─ Beyond Trauma: Silence, Exorcism and the Doomed Journey to a Lost Self 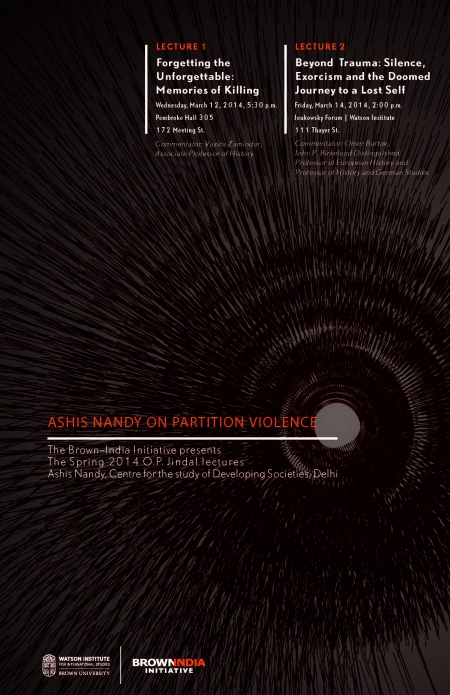 Ashis Nandy will deliver the fourth OP Jindal Distinguished Lecture. The series, organized by the Brown-India Initiative, was endowed in perpetuity by Sajjan and Sangita Jindal to promote a serious discussion of politics, economics, social and cultural change in modern India. Dr. Nandy, a political psychologist and social theorist called the country’s “most formidable and controversial intellectual, its most arresting thinker,” and recently listed as among the world’s ‘top 100 public intellectuals’ by Foreign Policy magazine, is a major political and cultural critic in contemporary India.

One of contemporary India’s most prolific writers, Nandy has published dozens of books and articles on the psychology of politics and culture. These include The Intimate Enemy: Loss and Recovery of Self Under Colonialism (Oxford India, 2010), in which Nandy turns colonial studies on its head by examining the impact of imperialism on the colonizing nation itself; and The Savage Freud and Other Essays on Possible and Retrievable Selves (Princeton, 1995), a series of essays in which he “seeks to locate cultural forms and languages of being and thinking that defy the logic and hegemony of the modern West.”