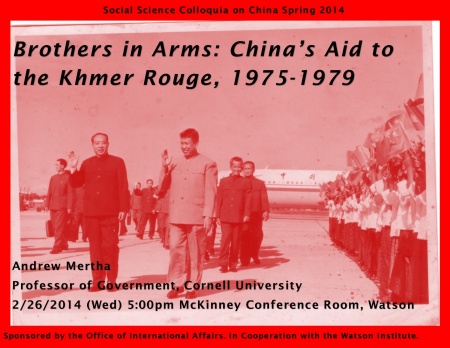 Beijing's extensive engagement with the developing world suggests an inexorably rising China, securing a degree of economic and political dominance unthinkable a decade ago. Yet, China’s experience with its first-ever client state, Democratic Kampuchea, suggests the effectiveness of Chinese foreign aid and the efficacy of Chinese influence that comes with it is only as good as the institutions that manage such a relationship.  When the Khmer Rouge regime came to power in Cambodia in 1975, it was utterly dependent on Chinese foreign aid and technical assistance to survive. Yet given this extremely asymmetrical relationship between a modernizing, nuclear power (China) and a pre-modern, medievalstate (DK), China was singularly unable to leverage its power to influence Cambodian politics or policy. In this talk, Professor Mertha will provide an institutionalist argument to explain why.  By focusing on this historical case, he will peer into the “black box” of Chinese foreign aid (which is almost impossible to do today) to illustrate how China’s domestic institutional fragmentation limits its ability to influence recipient countries of Chinese foreign aid.  This has important implications for understanding the limits of China’s contemporary foreign aid regime and its projection of soft power abroad.