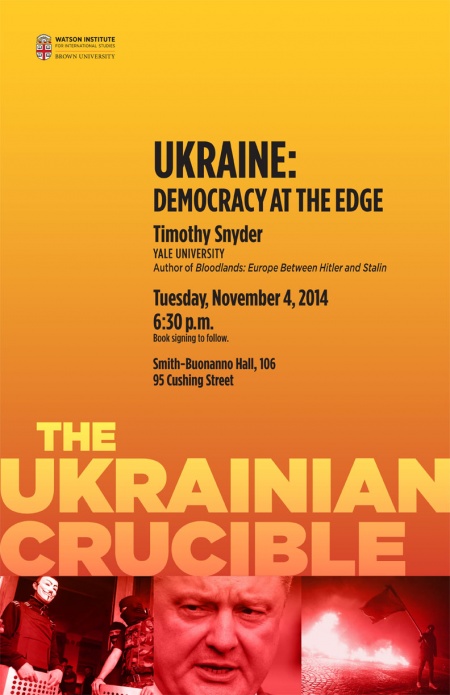 Timothy Snyder is the Bird White Housum Professor of History at Yale University.

He received his doctorate from the University of Oxford in 1997, where he was a British Marshall Scholar. Before joining the faculty at Yale in 2001, he held fellowships in Paris and Vienna, and an Academy Scholarship at Harvard. He is the author of five award-winning books, including: Nationalism, Marxism, and Modern Central Europe: A Biography of Kazimierz Kelles-Krauz (Harvard Press, 1998); The Reconstruction of Nations: Poland, Ukraine, Lithuania, Belarus, 1569-1999 (Yale Press, 2003); Sketches from a Secret War: A Polish Artist’s Mission to Liberate Soviet Ukraine (Yale Press, 2005); The Red Prince: The Secret Lives of A Habsburg Archduke (Basic Books, 2008). He is also the co-editor of two books, Wall Around the West: State Power and Immigration Controls in Europe and North America (Rowman and Littlefield, 2001) and Stalin and Europe: War, Terror, Domination (forthcoming). In 2010 he published Bloodlands: Europe Between Hitler and Stalin, a history of Nazi and Soviet mass killing on the lands between Berlin and Moscow. It has received a number of honors, including the Leipzig Prize for European Understanding and the Ralph Waldo Emerson Award in the Humanities. It was named a book of the year by some dozen publications, has been translated into more than twenty languages, and was a bestseller in four countries. Most recently he helped Tony Judt to compose a thematic history of political ideas and intellectuals in politics, Thinking the Twentieth Century, published by Penguin in February 2012.