Gaochao He ─ Chinese Labor Unions in an Era of Great Transformation: Challenges and Best Practices in Guangdong 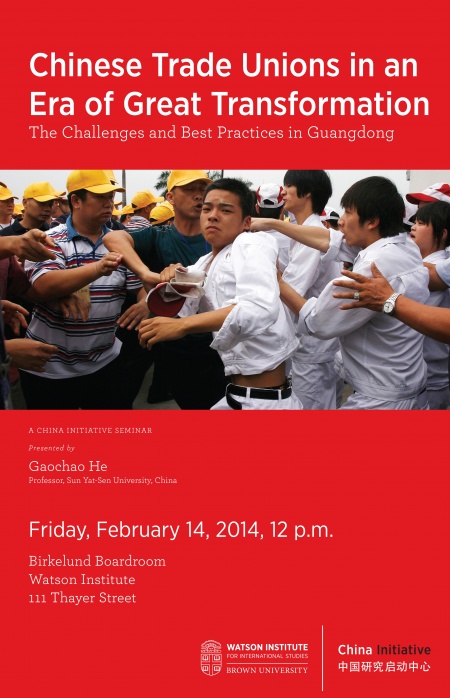 How is the transformation of socialism to market capitalism in China changing the dynamics of Chinese labor politics? Would the conventional approach of state-society relation still have enough explanatory power to account for the changing realities? Based on the observations of strikes and collective bargaining in the Pearl River Delta in Guangdong, an alternative approach will be suggested to explain the challenges and best practices of trade unionism in China.

Gaochao He received his PhD in political science from the University of Chicago in 1993, and is currently a professor in the political science department at Sun Yat-Sen University in Guangzhou, China. He is also the co-director of the International Center for Joint Labor Research. His research interests mainly focus on the politics of labor, and on the changing labor relations among the state, trade union, managers and workers in China. He has conducted various surveys and interviews on workplace politics in China since 1995, and is currently conducting research on the impacts of strike wave since 2010 on the evolution of Guangdong labor regime. He is currently working on a book manuscript of Remaking of Labor Regime in China in an Era of Reform: A Guangdong Story.