Defining Ukraine: Domestic Politics in the Shadow of Catastrophe 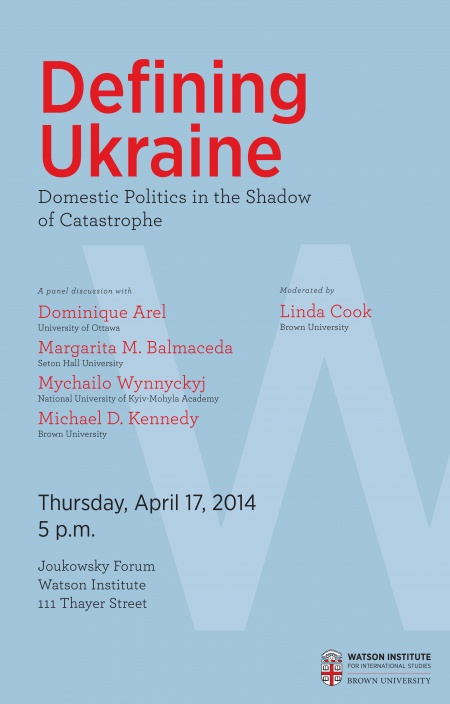 Mychailo Wynnyckyj, Associate Professor of the Department of Sociology and Kyiv-Mohyla Business School, Director of the Doctoral School, National University of “Kyiv-Mohyla Academy”

Margarita M. Balmaceda is Professor of Diplomacy and International Relations at Seton Hall University and Research Associate at the Harvard Ukrainian Research Institute. She is the author of, among others, Energy Dependency, Politics and Corruption in the Former Soviet Union (Routledge, 2008), The Politics of Energy Dependency: Ukraine, Belarus and Lithuania Between Domestic Oligarchs and Russian Pressure (Toronto: University of Toronto Press, 2013), and Living the High Life in Minsk: Russian Energy Rents, Domestic Populism and Belarus’Impending Crisis (Budapest: Central European University Press, 2014). She work is based on has extensive field research in Ukraine, Belarus, Lithuania, Moldova and Russia, under the auspices of Fulbright and other fellowships.

Michael D. Kennedy, is Professor of Sociology and International Studies at Brown University. Kennedy has engaged East European social movements, national identifications, and systemic change for 35 years, and for the last 15 focused on their articulation with global transformations. His book, Globalizing Knowledge: Intellectuals, Universities, and Publics in Transformation, is forthcoming from Stanford University Press. The title of his presentation on the 17th will be "The Implications of Ukrainian Transformations for Global Politics"

Mychailo Wynnyckyj, Associate Professor of the Department of Sociology and Kyiv-Mohyla Business School, Director of the Doctoral School, National University of “Kyiv-Mohyla Academy.” In addition to teaching in the Department of Sociology, and at Kyiv-Mohyla Business School, he oversees a project aimed at reforming the traditional Ukrainian “aspirantura” system into a European-styled Doctorate. His Facebook postings on the dynamics of Euromaidan, the Crimea Invasion, and the prospects for war have exemplified the sociological imagination. The title of his talk on the 17th will be "Dignity and Sovereignty in Ukraine's Transformations"