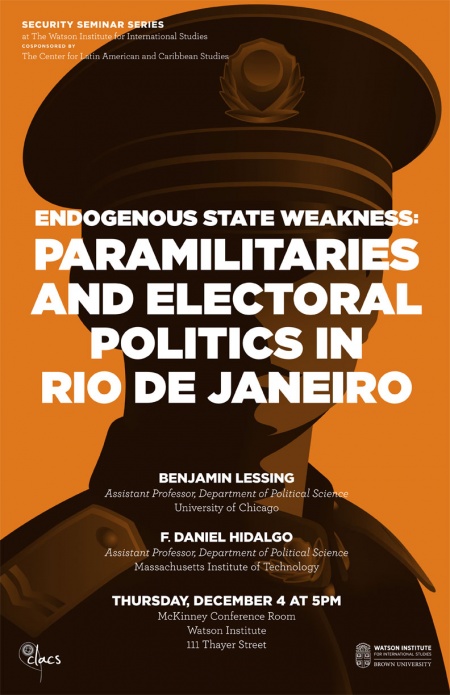 F. Daniel Hidalgo is an assistant professor in the department of political science at the Massachusetts Institute of Technology. He received his doctorate in Political Science at the University of California at Berkeley and received a BA at Princeton University. Hidalgo is a past recipient of grants from the National Science Foundation and the Fulbright program. His research focuses on the political economy of elections, campaigns, and representation in developing democracies, as well as quantitative methods in the social sciences. His work has appeared in journals such as the Review of Economic and Statistics and the American Journal of Political Science.

Benjamin Lessing is an assistant professor in the department of political science at the University of Chicago. He studies “criminal conflict”—organized armed violence involving non-state actors who, unlike revolutionary insurgents, are not trying to topple the state. His doctoral dissertation examines armed conflict between drug cartels and the state in Colombia, Mexico, and Brazil, and recently won the INEGI/UNODC Second International Thesis Contest on Public Security, Victimization, and Justice in Latin America. Additionally, he has studied prison gangs’ pernicious effect on state authority and how paramilitary groups use territorial control to influence electoral outcomes.

Lessing received an MA in economics and a PhD in political science from the University of California, Berkeley. He also holds a BA in economics and philosophy from Kenyon College. He recently completed a postdoctoral fellowship at Stanford University’s Center on Democracy, Development, and the Rule of Law (CDDRL) and the Center on International Security and Cooperation (CISAC). Prior to his graduate work, Lessing conducted field research on the small arms trade in Latin America and the Caribbean for numerous international organizations. In addition, he was a Fulbright student grantee in Argentina, Brazil, and Uruguay.

Co-sponsored by the Center for Latin American and Caribbean Studies and the Security Seminar Series.