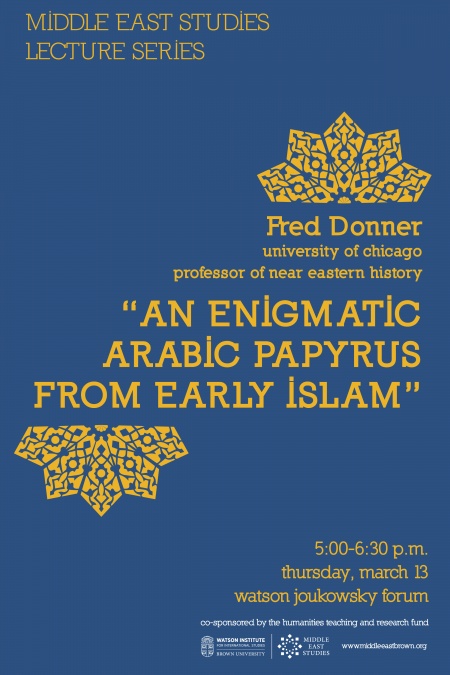 The origins of Islam have been the subject of intense debate for the past forty years, largely because of uncertainty about the reliability of the sources on which the traditional narrative of Islam's beginnings was based. The only way to resolve these debates is to examine closely every scrap of truly documentary evidence from the time of Islam's origins; but there is, unfortunately, only a very limited corpus of such documents. The talk begins by reviewing very briefly some of the diverse views that have been advanced about Islam's origins, and then moves on to examine a newly-identified early Arabic papyrus document and its implications for our understanding of the world in which Islam began and the nature of the earliest community.

Fred Donner’s early interest in the role of pastoral nomadic groups in Near Eastern societies led him to write a dissertation on the role of Arabian pastoral nomadic groups in the early Islamic conquest movement in Iraq in the seventh century C.E. His first book, The Early Islamic Conquests (Princeton University Press, 1981), examined this question in more detail, particularly the relationship between pastoral nomads and the state, as well as the more general processes of state-formation and state-expansion that, he thinks, were an integral part of the early conquest movement. He has also written several articles dealing with the question of pastoral nomads and their place in the history of the region.

Close work with the sources for this early period of Islamic history, and the profound questions about the reliability of these sources raised by revisionist scholarship that has appeared since 1977, led Donner to a long-term examination of those sources. This resulted in several shorter studies and culminated in his Narratives of Islamic Origins: the beginnings of Islamic historical writing (Darwin Press, 1998).

Donner’s interests then shifted to the intellectual or ideological factors that were at play in the early expansion of Islam, and to an effort to understand just what the movement was all about. The significance of militant piety, possibly rooted in an apocalyptic outlook, had already been suggested in Narratives of Islamic Origins. However, he also concluded that Islam’s roots lay in what can most properly be called the “Believers’ movement,” begun by Muhammad (d. 632 CE), which was a stringently monotheistic and pietistic reform movement that also included righteous Jews and Christians. It was only after about two generations, beginning about 680 CE, that the Qur’anic Believers (who came to call themselves “Muslims”) separated themselves from Christians and Jews as a separate confession, effectively defining Christians and Jews out of the movement, which now became the distinct confession we know as Islam. These ideas he developed in his article “From Believers to Muslims: Confessional Self-Identity in the Early Islamic Community,” Al-Abhath 50-51 (2002-2003), 9-53 (a pdf of this article is found below), and more fully in his monograph Muhammad and the Believers: at the origins of Islam (Harvard University Press, 2010).

Most recently, Donner has turned to the study of true documents for the first century of Islam (roughly the seventh century CE), particularly Arabic papyri. Thanks to a Guggenheim Fellowship he was able to take leave in 2007-2008 to examine Arabic papyri in Paris, Oxford, Heidelberg, and Vienna.

His teaching at the University of Chicago focuses on early Islamic history, Islamic social history, and aspects of Islamic law.