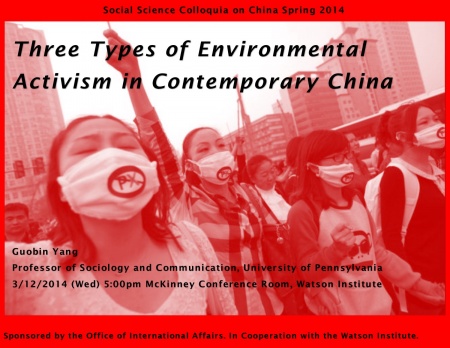 Yang is a member of the editorial boards of The China Quarterly, Public Culture, Contemporary Sociology, and the International Convention for Asian Studies Publications Series of the Amsterdam University Press. He received a John D. and Catherine T. MacArthur Foundation “Writing and Research Grant” (2003) and was a fellow at the Woodrow Wilson International Center for Scholars in Washington, D.C. (2003-2004). Previously he taught as an assistant professor of sociology at the University of Hawaii at Manoa and as an associate professor of Asian and Middle Eastern Cultures at Barnard College of Columbia University. He has a PhD in English Literature with a specialty in Literary Translation from Beijing Foreign Studies University (1993) and a second PhD in Sociology from New York University (2000).

Sponsored by the Office of International Affairs in cooperation with the Watson Institute.