Hussein Banai ─ The US and Iran: Prospects for a Breakthrough 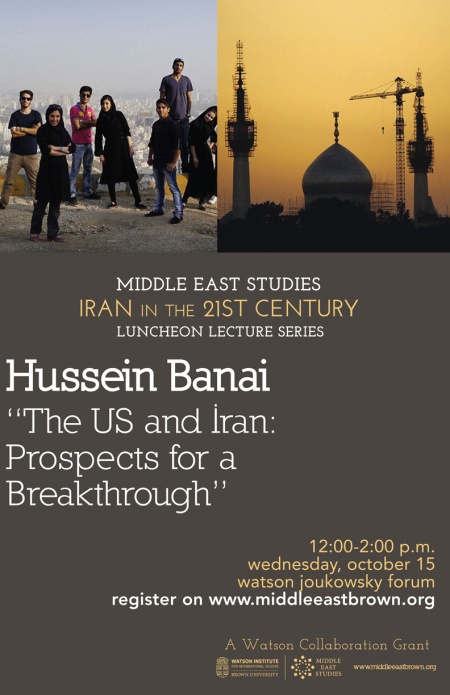 In the grand tapestry of international politics, the tentative nuclear deal between Iran and the P5+1 (the five permanent members of the United Nations Security Council plus Germany) may amount to little more than a scrawl at the margins of an otherwise menacing installment. As evidenced by the increasingly ruckus political jockeying of domestic lobby groups and third party spoilers (principally Saudi Arabia and Israel), the nuclear standoff is the product of multiple, intersecting, and overlapping political agendas on the part of a host of actors.

A successful resolution of the current crisis requires a long-term diplomatic strategy aimed at transforming Iran’s revolutionary anxieties. But is this achievable as long as the strategic logic underpinning the enmity between the two sides remains in tact?

This talk will lay out the key variables at the root of the enmity between US-Iran and assesses the prospects for improvement in relations between the two sides in both the short and long term.

Hussein Banai is assistant professor in diplomacy and world affairs at Occidental College and a research affiliate at the Center for International Studies at the Massachusetts Institute of Technology. His research interests are in democratic theory, diplomatic history, and Middle East politics (with special focus on politics in modern Iran).

Banai is the co-author of Becoming Enemies: U.S.-Iran Relations and the Iran-Iraq War, 1980-1988, and has published widely in academic and professional journals on topics in diplomacy, U.S.-Iran relations, and democratic development in the Middle East. He is currently completing a book manuscript on Iranian liberal political thought, provisionally titled, Hidden Liberalism: The Paradox of Political Struggle in Modern Iran.

Banai was born and raised in Tehran, Iran, until the age of 15. He earned his BA in Political Science at York University in Canada in 2003, his MSc in international relations at the London School of Economics and Political Science in the UK in 2005, and his PhD in political science from Brown University in 2011. His doctoral dissertation, “Democracy in Context: Between Universal Ideals and Local Values,” was awarded the Joukowsky Family Foundation Outstanding Dissertation Prize in the social sciences by the Graduate School at Brown.

At Occidental, Banai is co-convener, along with former U.S. ambassador to Finland and Chevalier Professor of Diplomacy Derek Shearer, of the “Craft of Diplomacy Initiative” at the McKinnon Center for Global Affairs.