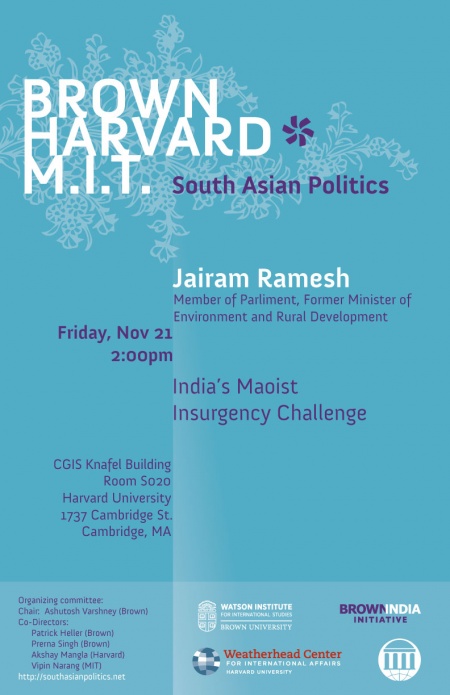 Jairam Ramesh, a senior leader of the Indian National Congress party, is an Indian economist and politician. Since June 2004, Ramesh has been a member of parliament in the Rajya Sabha – the upper house of the Parliament of India – from the state of Andhra Pradesh. As an economist, he was entrusted with several crucial roles as an advisor to the Finance Minister (1996-98) and also to the Prime Minister (1991). With a special interest in China, Ramesh is the Honorary Fellow of the Institute of Chinese Studies, New Delhi, since 2002. Jairam Ramesh was also a member of the National Advisory Council that is chaired by Sonia Gandhi. Ramesh has served in various ministries during his career. Specifically, he was Union Minister of Rural Development (2001-2014), including the new Ministry of Drinking Water and Sanitation, Minister of State (Independent Charge) Environment and Forests (2009-2011), Minister of State of Power and Commerce (2008-2009) and Minister of State of Commerce (2006-2009). In previous years he has also held the position as member of the Ministry of Finance, the Committee on Government Assurance, the Committee on Public Accounts, and the Court of the Jawaharlal Nehru University. He has worked in the Prime Minister's Office, Ministry of Industry, Planning Commission, Advisory Board on Energy and other government departments at senior levels during 1980-1998. Associated with various education institutions in India and abroad, Ramesh has received the Distinguished Alumnus Award from the IIT, Bombay, where he completed his B. Tech in Mechanical Engineering. Ramesh has been a founding member of the Indian School of Business in Hyderabad. He received a master of science in public management at the Heinz College at Carnegie-Mellon University, USA, and has also studied technology policy at MIT. Ramesh has also worked in journalism, and has been a columnist for Business Standard, Business Today, The Telegraph, Times of India and India Today. He is also the author of the book Making Sense of Chindia (2005), which describes the forces of globalization and liberalization.