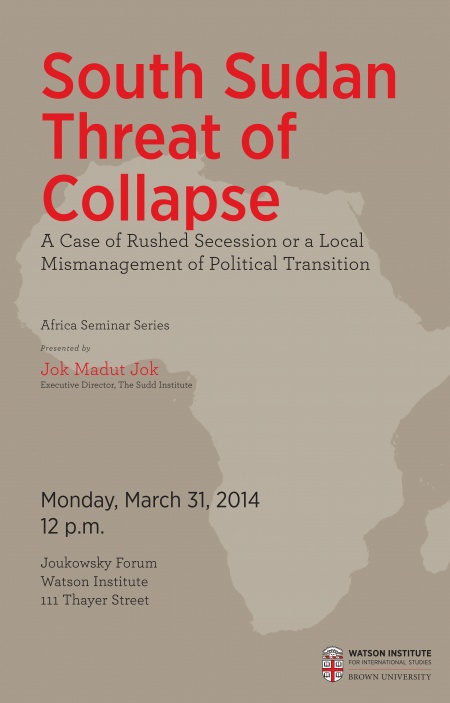 This presentation will examine the history of the struggle for independence, the local dynamics in that struggle, the peace agreement that ended what had been Africa's longest running and deadliest war, its leader's failure to democratize and the recent near collapse of the country in the wake of political rivalries within the ruling Sudan Peoples' Liberation Movement. To what extent is it true that independence of South sudan was haphazardly pushed through by the United States? The presentation will focus on what was planned at independence but not followed through, why the observers could not predict the recent clashes that have already killed 10,000 people and displaced 1 million people and what should be the way out of this mess. How can South Sudan be crafted together, in light of the current violence, so that the country can best weather episodes of instability in the future? What is the current play of events and what can the international community do to restore South Sudan back to stability and forge a future state that will be capable of resisting the use of ethnic identity to forge political alliances, a truly important step if the country is to remain viable, unified and able to meet the aspiration of the communities that are currently in arms agains the state.

Jok Mudut Jok is the executive director of the Sudd Institute.