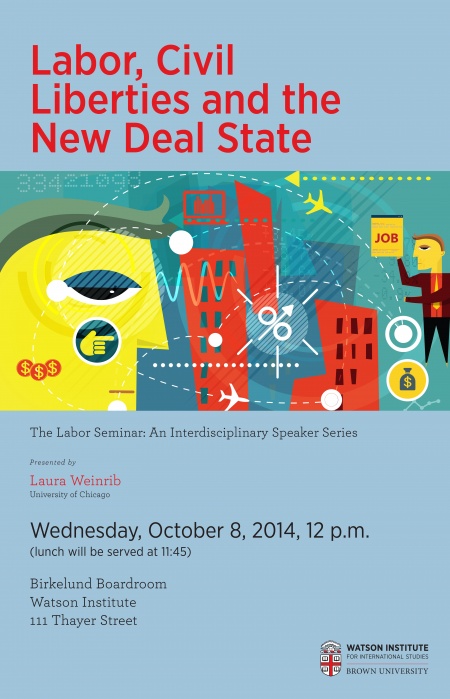 This Labor Seminar will be presented by Laura Weinrib, Assistant Professor of Law, University of Chicago

The article for this seminar will examine the unexplored relationship between civil liberties and organized labor during the New Deal. Based on archival research, it demonstrates that early proponents of “civil liberties” understood the term to encompass, above all, the rights to organize, picket, and strike. Although a broad-based consensus emerged around those rights during the 1930s, advocates differed sharply with respect to the best means of enforcing them. The court-based strategy that ultimately prevailed was deeply contested and remained controversial well after the foundational First Amendment victories. Today, theories of civil liberties are premised on state neutrality in the realm of public debate; in the 1930s, the most prominent accounts of civil liberties demanded affirmative government intervention to correct distortions in the marketplace of ideas or to advance substantive rights. Reconstructing the alternative visions of civil liberties and their optimal enforcement reveals the anticipated trade-offs of the judicial strategy, with important implications for the history of the “Constitutional Revolution” and for theoretical accounts of constitutional change.

The paper is available here.