Li Zhang ─ The Rise of Therapeutic Governance in China 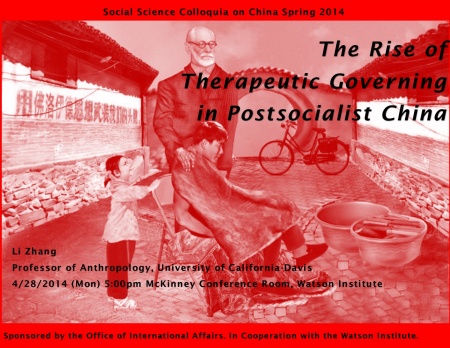 This talk explores how and why has psychological intervention gradually become a critical tool of managing the population and governing society in postsocialist China. It argues that psychological counselors and experts are becoming a new form of authority, an indispensible part of creating and managing knowable and stable subjects for the military, the police, schools, and enterprises. The central concept, “therapeutic governing,” refers to the adoption of the therapeutic ethos, techniques, and perspective to improve the management of the work force and to help individuals cope with life in the rapidly changing world. The talk examines what drives local authorities to pursue this change, and how therapeutic governing takes on a different character and significance given China’s unique path of economic reform, socialist legacies, and interface with global capitalism and culture. Professor Zhang suggests that despite the danger of psychologizing social and economic problems, the meshing of therapeutic practices and care with flexible governing techniques has come to be seen by some as an experiment of a new style of governing—“kindly governance,” which is based on the notion of humanism (renxinhua) to contrast with the past socialist rule based on class struggle and coercion.

Li Zhang is the department of anthropology chair and professor, University of California, Davis.  Li Zhang received her doctoral degree in anthropology from Cornell University in 1998 and a M.A. degree in social relations from UC Irvine in 1993. Before coming to the U.S., she studied Chinese literature and literary theory at Peking University and received her B.A. and first M.A. there. She was a postdoctoral fellow at the Fairbank Center for East Asian Research, Harvard University (1998--1999).

Sponsored by the Office of International Affairs in cooperation with the Watson Institute.