Lisa Wedeen ─ Neoliberal Autocracy and its Unmaking in Syria: 2000-2014 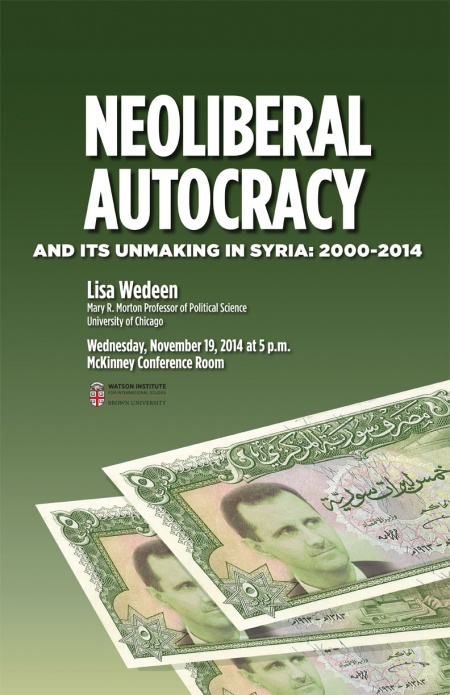 Lisa Wedeen is the Mary R. Morton Professor of Political Science and the College and the Co-Director of the Chicago Center for Contemporary Theory at the University of Chicago. Her publications include Ambiguities of Domination: Politics, Rhetoric, and Symbols in Contemporary Syria (1999); "Conceptualizing 'Culture': Possibilities for Political Science" (2002); "Concepts and Commitments in the Study of Democracy" (2004), Peripheral Visions: Publics, Power and Performance in Yemen (2008), "Ethnography as an Interpretive Enterprise" (2009), "Reflections on Ethnographic Work in Political Science" (2010), and "Ideology and Humor in Dark Times: Notes from Syria" (2013). She is the recipient of the David Collier Mid-Career Achievement Award and an NSF fellowship. She is currently working on a book about ideological interpellation, neoliberal autocracy, and generational change in present-day Syria.