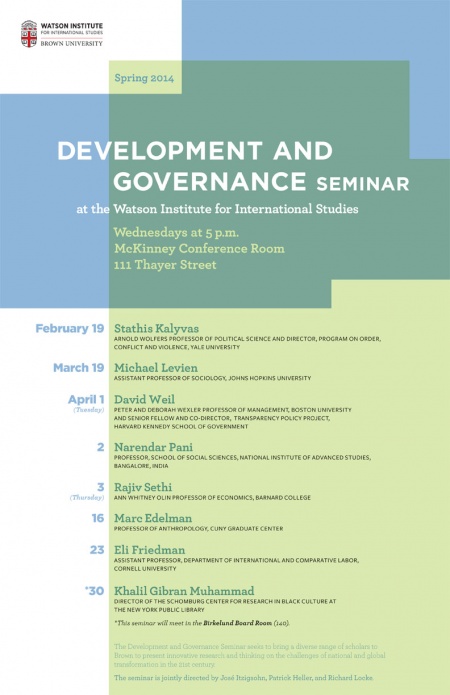 Michael Levien will present a paper that seeks to explain why the implementation of “free market” policies in India since the early 1990s has led to an expansion of the state’s role in dispossessing land from farmers. First, it argues that the process of economic liberalization that began in the early 1990s has generated an unprecedented demand for land that cannot be met through private purchase in rural land markets. Second, it argues that the fierce interstate competition for investment generated by liberalization has pushed state governments to expand their use of eminent domain to help private capital overcome this barrier. Third, it argues that this expansion of the state’s role in dispossessing land has been further incentivized by the licit and illicit rents that this role makes available to government coffers and individual officer-holders. The result has been a transition from a developmentalist regime of dispossession in which state governments limited themselves to expropriating land for public sector industrial and infrastructure projects to a neoliberal regime of dispossession in which states have become land brokers for private—and increasingly real estate—capital. Under this new regime of dispossession, exemplified by private Special Economic Zones, Indian states are expropriating more land for a broader range of purposes that are more difficult to legitimize with claims to “development” and the “national interest.” This helps to explain the proliferation of “land wars” across rural India in the past decade.

Michael Levien is an assistant professor in the department of sociology at Johns Hopkins University.