Nazim Hikmet: One Poet, One Nation, One World 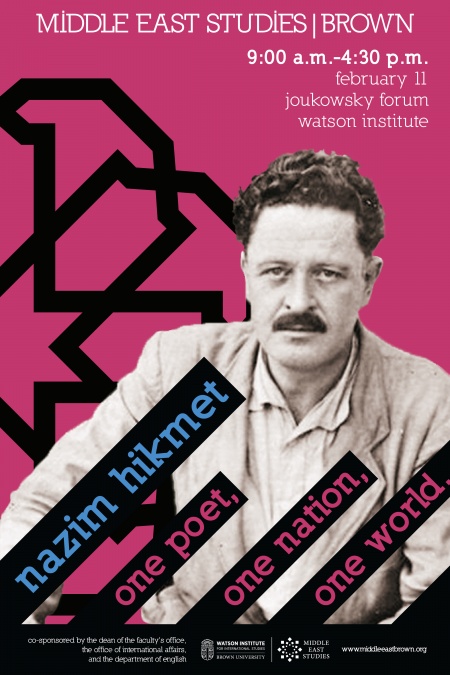 Nazim Hikmet, the first and greatest poet of modern Turkey, is not only one of the giants of world poetry but one of the unsung heroes of the twentieth century. A survivor of thirteen years in Turkish prisons and thirteen more in exile in the Soviet Union, he produced a body of work whose scope and power affirm the ultimate triumph of the human spirit over the forces of tyranny. Silenced in his own country for a quarter-century, his work has since been translated into more than fifty languages around the world.

Brown University is hosting the first conference in the United States devoted to his life and work. The conference will focus particularly on the global impact of his life and work, which have served as an inspiration to people, especially in the Middle East, aspiring to self-determination as they emerged from the ruins of empire. At the same time, because his birth as a poet coincided with the birth both of his nation and of his language (written Turkish), his life and work raise the issue of the relationship between nation-building and a national language. And in an age when so many countries with diverse populations look poised to make the leap from one-man or one-party rule to pluralistic nationhood, the Turkish model appears to be increasingly appealing, and Hikmet’s experience with precisely that transition, documented and dramatized as it is in his poetry, might be another point of discussion.

Although the primary points of discussion at this conference will concern the international influence, whether poetic or political, of this historic figure, no discussion of him will be complete without an acknowledgment of the central role the commanding moral presence of his life and poetry continues to play in Turkey and on the world stage.

Cosponsored by the Dean of the Faculty's Office, the Office of Global Engagement, and the Department of English.

“Nazim Hikmet: One Poet, One Nation, One World”