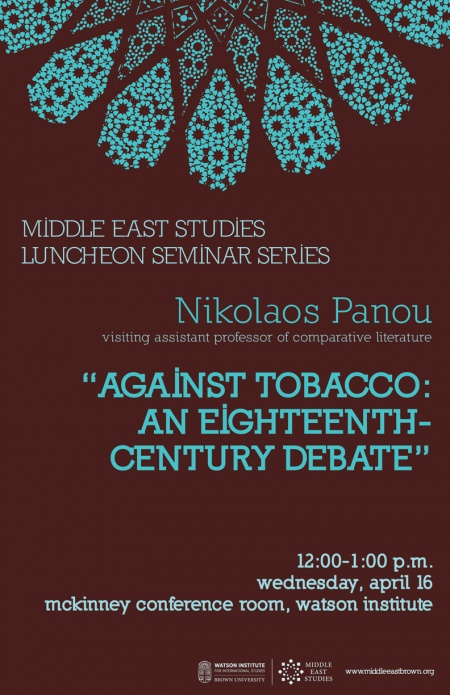 This talk focuses on a little-known instance in the long history of debates over tobacco in the early modern period. Written by one of the most prominent and learned Phanariots, Nikolaos Mavrokordatos (1670-1730), the text we will discuss, a vitriolic dialogue in the style of Lucian, embodies the tension that still surrounded smoking in the Ottoman East at the beginning of the eighteenth century. In its turn, that tension is indicative of the vital role that tobacco consumption played in the redefinition of a wide range of moral norms, social practices, and cultural ideals in the course of the period under consideration.

Nikos Panou is a visiting assistant professor in the Department of Comparative Literature at Brown University. He received his Ph.D. in Comparative Literature from Harvard University and has been a postdoctoral fellow at the Seeger Center for Hellenic Studies and the Society of Fellows in the Liberal Arts, Princeton University. His current research focuses on the ways power and authority were conceptualized and represented in pre-modern philosophical discourse, with a particular emphasis on moral and political works written from the sixteenth to the eighteenth century. He has written on topics ranging from Byzantine historiography to seventeenth-century satire. Among other things, he has edited a collective volume on conceptions of tyranny from Antiquity to the Renaissance that is forthcoming with Oxford University Press.