Ricardo Lagos ─ Quo Vadis, Latin America? What Lies Ahead for the Region 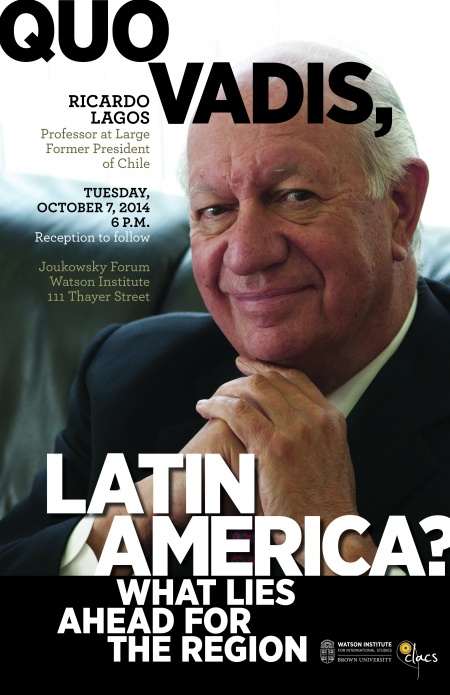 Widely regarded as one of Latin America's most important political leaders, Ricardo Lagos Escobar served as president of Chile from 2000 to 2006. During his term, Lagos was known for aggressively pursuing free-trade agreements, improving health care and education legislation, and addressing the crimes of Augusto Pinochet's military regime.

Since leaving office, Lagos founded the Fundación Democracia y Desarrollo (Foundation for Democracy and Development) in 2006 and currently serves as its president. He is also vice-chair of the Inter-American Dialogue and was UN special envoy for climate change from 2007 to 2010.

Lagos earned a law degree from the University of Chile in 1960 and then attended Duke University, where he received a PhD in economics in 1966. He returned to Chile and served as director of the University of Chile's School of Political and Administrative Sciences and was subsequently appointed secretary general of the Latin American Faculty of Social Sciences. Prior to the military coup against President Salvador Allende, Lagos had been nominated Chilean ambassador to the Soviet Union. In 1973, however, shortly after the appointment, Allende was overthrown by General Augusto Pinochet, and Lagos was never confirmed.

Following the coup, Lagos lived in the United States and Argentina. He served at the United Nations as consultant and economist in UNESCO and the International Labor Organization. In 1978, he returned to Chile, where he became president of the Democratic Alliance, a coalition of parties opposed to Pinochet. In 1987, Lagos founded the Party for Democracy (Partido por la Democracia). He served as minister of education under the government of President Patricio Aylwin (1990-1994) and as minister of public works under President Eduardo Frei (1994-2000). Elected president in January 2000, Lagos became the first socialist to hold the office since Allende.