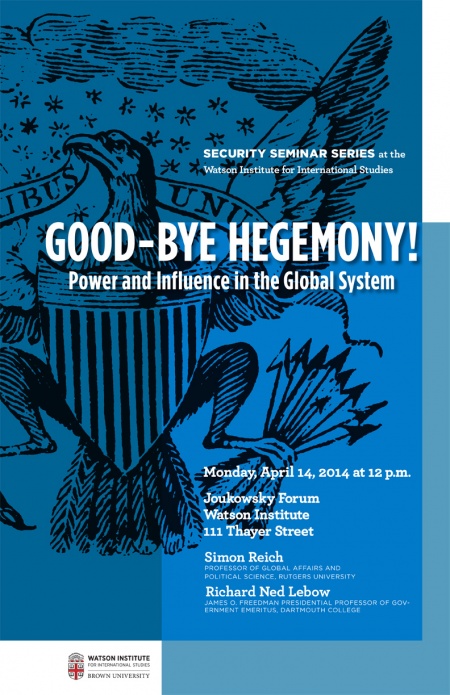 A light lunch will be provided.

Simon Reich and Richard Ned Lebow will discuss their book, Good-Bye Hegemony!: Power and Influence in the Global System.

Many policymakers, journalists, and scholars insist that U.S. hegemony is essential for warding off global chaos. Good-Bye Hegemony! argues that hegemony is a fiction propagated to support a large defense establishment, justify American claims to world leadership, and buttress the self-esteem of voters. It is also contrary to American interests and the global order. Simon Reich and Richard Ned Lebow argue that hegemony should instead find expression in agenda setting, economic custodianship, and the sponsorship of global initiatives. Today, these functions are diffused through the system, with European countries, China, and lesser powers making important contributions. In contrast, the United States has often been a source of political and economic instability.

Rejecting the focus on power common to American realists and liberals, the authors offer a novel analysis of influence. In the process, they differentiate influence from power and power from material resources. Their analysis shows why the United States, the greatest power the world has ever seen, is increasingly incapable of translating its power into influence. Reich and Lebow use their analysis to formulate a more realistic place for America in world affairs.

Simon Reich is professor of global affairs and political science at Rutgers University.