Sports, Diplomacy and Soft Power: A Framework for Analysis 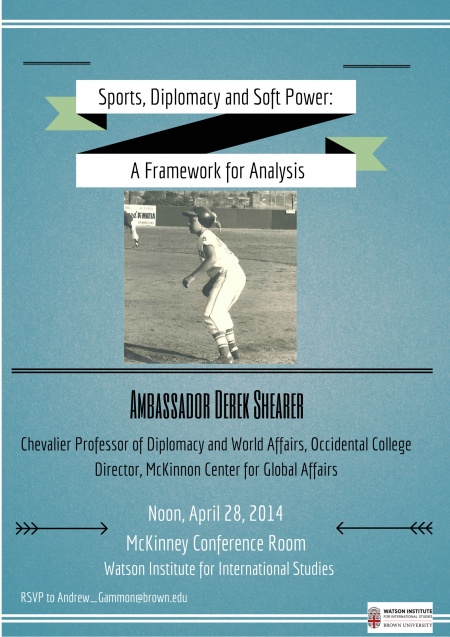 Lunch will be provided, RSVP to Andrew_Gammon@brown.edu.

Ambassador Shearer served in the Clinton administration as an economics official in the Commerce Department, and then as Ambassador to Finland (1994-97). Among his many accomplishments were the creation of the administrations coordinated strategy to the Nordic-Baltic region and the hosting of the Clinton-Yeltsin summit in Helsinki. After diplomatic service, Ambassador Shearer was a fellow at the Economic Strategy Institute and then at the Woodrow Wilson Scholars Center in Washington, DC. He also was a visiting Woodrow Wilson fellow and ambassador-in-residence at a number of colleges. He served as a foreign policy advisor to Vice President Gore during the 2000 Presidential campaign and to Senator Hillary Clinton in the 2007-2008 Presidential primary contests. He is a graduate of Yale, class of 1968, where his classmates included President George W. Bush and filmmaker Oliver Stone.

Ambassador Shearer’s articles on foreign affairs and public policy have appeared in the New York Times, the International Herald Tribune, the Wall Street Journal, and many weekly and monthly publications. He has authored numerous scholarly and policy articles in books and journals—and has lectured at leading universities in Europe, Asia, and Australia, including speaking tours for the US government in China, Japan, South Korea, Greece, Australia, the Baltic States, Chile, New Zealand and Kazakhstan, Syria, Peru and Bolivia and taught at the University of Maryland, Tufts, and UCLA, as well as at Occidental. He has been the recipient of a Guggenheim Fellowship, an US-Japan Leadership Fellowship, and a Swedish Bicentennial Fellowship, among other honors and he is listed in Who’s Who in the World, Who’s Who in America, and other such publications. He has been a senior fellow at the Center for Public Diplomacy located at the University of Southern California’s Annenberg School. Earlier in his career, he was an official in state and local government in California. His public policy books include Economic Democracy ( co-author Martin Carnoy), A New Social Contract (with Carnoy and Rumsberger), Putting People First — 1992 Program of Clinton-Gore Campaign (with Magaziner, Reich et al); and the Public Policy Reader, edited with Lee Webb.