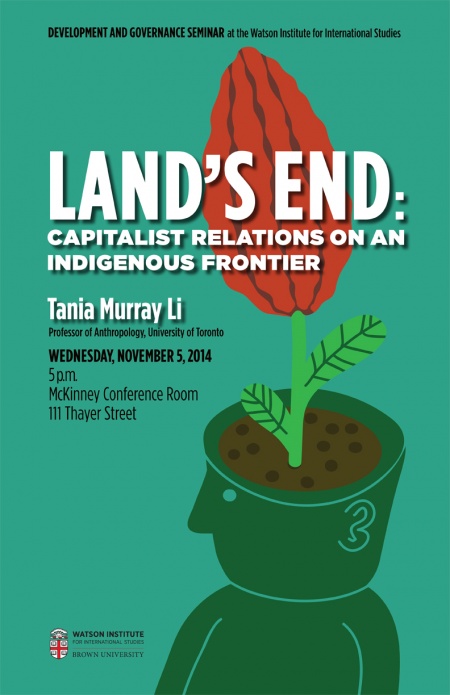 Drawing on two decades of ethnographic research in Sulawesi, Indonesia, Tania Murray Li offers an intimate account of the emergence of capitalist relations among indigenous highlanders who privatized their common land to plant a global market crop, cacao. Some prospered; others lost their land. It is a story with potent messages for social movement activists, who expect indigenous people to be guardians of community and tradition, committed to sustaining food production. It also interrupts transition narratives that expect people who lose their land to march off to the city to find a job. For these newly landless highlanders, as for many other post-peasants across Asia, jobs are scarce. When land's end is a dead end, a different politics must emerge.

Tania Murray Li is Canada Research Chair in the Political Economy and Culture of Asia in the Department of Anthropology at the University of Toronto, and author of Land's End: Capitalist Relations on an Indigenous Frontier (Duke University Press 2014), Powers of Exclusion: Land Dilemmas in Southeast Asia (with Derek Hall and Philip Hirsch, NUS Press, 2011), and The Will to Improve: Governmentality, Development, and the Practice of Politics (Duke, 2007).