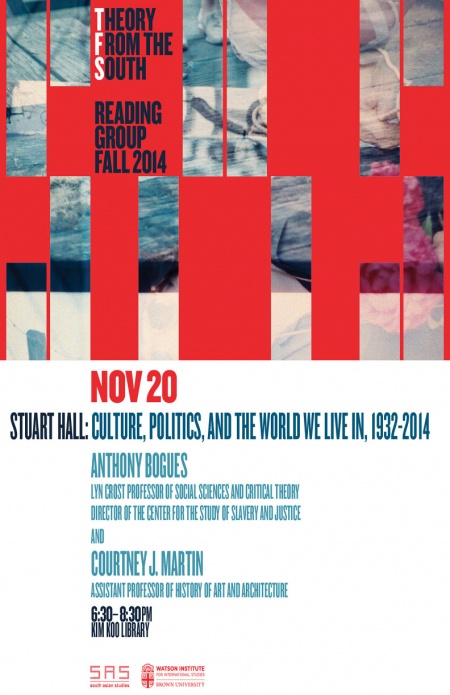 Anthony Bogues is Lyn Crost Professor of Social Sciences and Critical Theory in the department of Africana Studies, affiliated professor of Political Science and Modern Culture and Media, and director of the Center for the Study of Slavery and Justice at Brown University. Between 2004-2007, he was Royce Professor of Teaching Excellence. He has been a visiting professor at the Rhode Island School of Design, visiting professor of the humanities at Addis Ababa University, Ethiopia, and is currently honorary professor at the Center for African Studies at the University of Cape Town, South Africa. His major research and writing interests are intellectual and cultural history, radical political thought, critical theory, Caribbean and African politics and literature, and history of Haitian art.

Professor Bogues is the author of Caliban's Freedom: The Early Political Thought of C.L.R. James (1997); Black Heretics and Black Prophets: Radical Political Intellectuals (2003); and Empire of Liberty: Power, Freedom, and Desire (2010) and editor of two volumes of Caribbean intellectual history, After Man Towards the Human: Critical Essays on the Thought of Sylvia Wynter (2006) and The George Lamming Reader: The Aesthetics of Decolonization (2011) and the editor of From Revolution in the Tropics to Imagined Landscapes: The Art of Edouard Duval-Carrié (2014).

Art historian Courtney J. Martin is an Oberlin graduate with a master’s in art history and criticism from SUNY–Stony Brook and a Ph.D. in the history of art from Yale. She comes to Brown from Vanderbilt, where she was assistant professor of art history. Prior to entering graduate school, she worked in the media, arts and culture unit of the Ford Foundation in New York.

Martin is interested in the roles of people who populate the world of art: critics, historians, curators, conservators, collectors, dealers, and the artists themselves. Her writing includes, “They Will Come and They Will Go,” Exhuming Gluttony with Wangechi Mutu (2009); “The Twentieth-Century Dandy as Cultural Provocateur: Yinka Shonibare, MBE and the Diary of A Victorian Dandy,” from the edited volume, Black British Aesthetics Today (2007); “Sight Was Regulated, Shapes Were Continually Re-fashioned”: Alia Syed’s Eating Grass at the Biennale of Sydney (2006); and “The Re-selection of Ancestors: Abstraction in the Second Generation,” in Energy/Experimentation: Black Artists and Abstraction, 1964–1980, the Studio Museum in Harlem (2006).