Ukraine and the New World Disorder 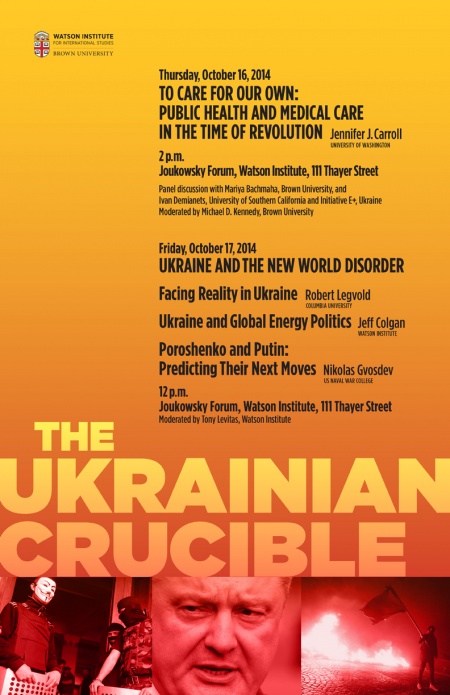 Lunch will be available.

Nikolas K. Gvosdev is a professor of national security affairs at the U.S. Naval War College and currently serves as the director of the Policy Analysis sub-course in the National Security Affairs Department. He is also a visiting professor at Brown University. He was the editor of The National Interest magazine and a Senior Fellow of Strategic Studies at The Nixon Center in Washington, DC. He is currently a senior editor at The National Interest and at the Atlantic Council and is a weekly columnist for World Politics Review. He is a participant in the Dartmouth Conference Task Force on U.S.-Russia relations.

Jeff D. Colgan is the Richard Holbrooke Assistant Professor in the Department of Political Science and Watson Institute for International Studies at Brown University. His book, Petro-Aggression: When Oil Causes War, was published in 2013 by Cambridge University Press. He previously taught at the School of International Service of American University 2010-2014, and was a Fellow at the Woodrow Wilson International Center for Scholars in Washington DC in 2012-13. He completed his PhD at Princeton University, and was a Canada-US Fulbright Scholar at UC Berkeley, where he earned a Master’s in Public Policy. Prof. Colgan has worked with the World Bank, McKinsey & Company, and The Brattle Group.

Robert Legvold is Marshall D. Shulman Professor Emeritus in the Department of Political Science at Columbia University, where he specialized in the international relations of the post-Soviet states. He was Director of The Harriman Institute, Columbia University, from 1986 to 1992. Prior to coming to Columbia in 1984, he served for six years as Senior Fellow and Director of the Soviet Studies Project at the Council on Foreign Relations in New York. For most of the preceding decade, he was on the faculty of the Department of Political Science at Tufts University. He received his Ph.D. from the Fletcher School of Law and Diplomacy in 1967. 2008-2010 he was project director for “Rethinking U.S. Policy toward Russia” at the American Academy of Arts and Sciences. He is presently director of the “Euro-Atlantic Security Initiative” sponsored by the Carnegie Endowment for International Peace and co-chaired by Sam Nunn, Wolfgang Ischinger, and Igor Ivanov.