Vipin Narang ─ Strategies of Nuclear Proliferation: How States Learned to Love Getting the Bomb 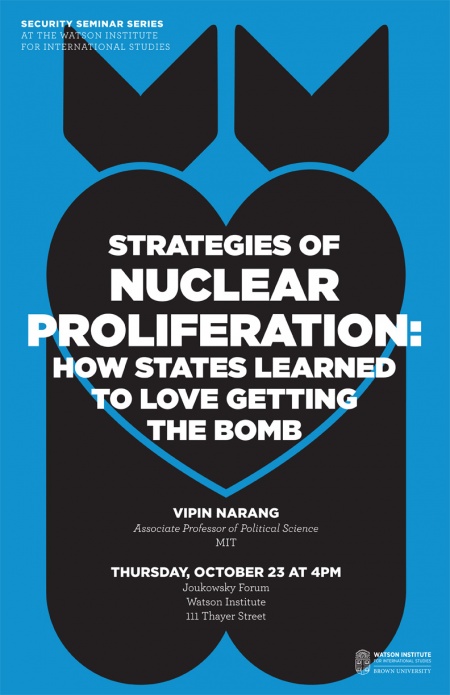 Vipin Narang is an associate professor of political science at MIT and member of MIT’s Security Studies Program. He received his PhD from the Department of Government, Harvard University in May 2010, where he was awarded the Edward M. Chase Prize for the best dissertation in international relations. He holds a BS and MS in chemical engineering with distinction from Stanford University and an MPhil with distinction in international relations from Balliol College, Oxford University, where he studied on a Marshall Scholarship. He has been a fellow at Harvard University’s Olin Institute for Strategic Studies, a predoctoral fellow at Harvard University’s Belfer Center for Science and International Affairs, and a junior faculty fellow at Stanford University’s Center for International Security and Cooperation. His research interests include nuclear proliferation and strategy, South Asian security, and general security studies. His work has been published in several journals including International Security, Journal of Conflict Resolution, and International Organization. His book on regional power nuclear strategy is forthcoming with Princeton University Press.