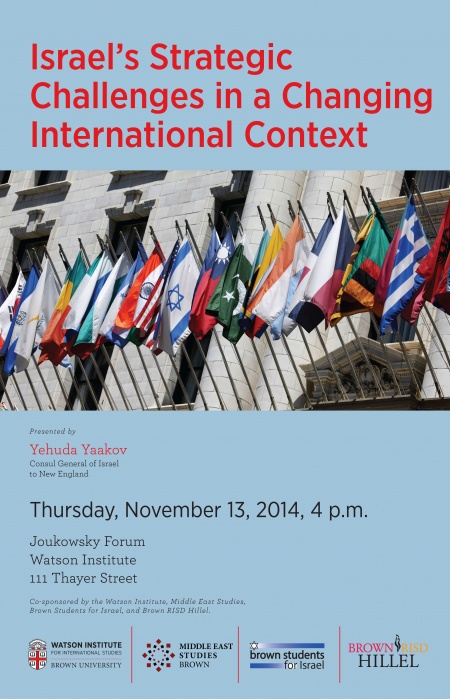 Tickets required. Brown ID and ticket required for seats in Joukowsky Forum. Seating in overflow space is open to the public with ticket. Reserve a ticket here.

Yehuda Yaakov brings to the position of Consul General of Israel to New England more than two decades of experience in public diplomacy and strategic affairs. He has been a member of Israel’s Foreign Service since 1989, previously serving outside of Israel in New York and New Zealand.​

For more than a decade, Yaakov has played an important role in formulating and implementing Israel's diplomatic approach to managing strategic challenges. Since 2008 he has focused on the public-diplomacy aspects of the Iranian crisis, work for which he received the Israeli Foreign Ministry Director-General's award for excellence in 2012.

Beforehand he led the department for the prevention of non-conventional weapons (2004-2007), a position he assumed after establishing and running the homeland security and counter-terrorism desk (2001-2004).

From 1997-2001, Yaakov served as Consul for Media and Public Affairs at the Consulate General of Israel in New York, where he oversaw the operation of Israel's extensive public affairs and media relations apparatus. He left for the Consulate General of Israel to New York after being the Ministry of Foreign Affairs arms control adviser (1995-1997), serving prior to that as deputy ambassador in the Israeli Embassy to New Zealand, in Wellington (1992-1995).

His diplomatic career has also included academic pursuits. In the spring of 2013 he published a translated version of his Haifa University master’s thesis analyzing the nuclear negotiations strategy of Iran's currant president Hassan Rouhani.

Yaakov grew up in Queens, New York, and received a BA in journalism and international relations from Syracuse University in 1982. The following year he immigrated to Israel where he served in the Israel Defense Forces.