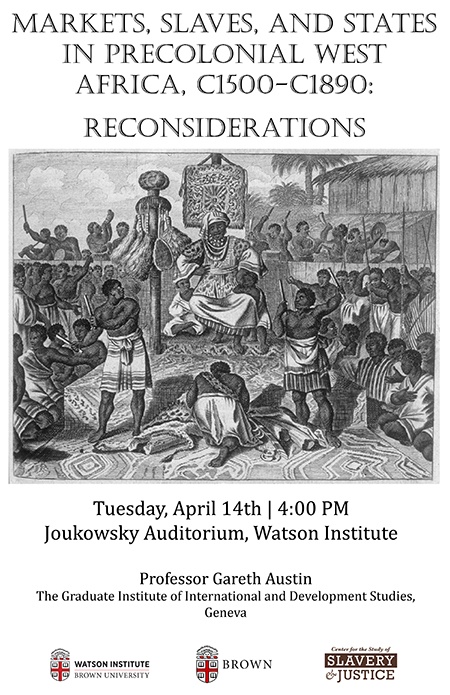 The economic historiography of the late twentieth century established close links between the histories of markets, slavery and states in precolonial West Africa. Specifically, it established the ubiquity and vitality of price-forming markets, the growing use of slave labor in commodity production within the region (during and especially after the beginning of the abolition of the Atlantic slave trade), and the dependence of state revenues on the exchange economy. This paper presents three elements from a book manuscript with the same title. The first is an attempt to move from a basically static view of the way markets worked in the sixteenth to nineteenth centuries towards a more historical one, highlighting institutional changes. The second is an attempt to reconcile the ‘social’ and ‘economic’ interpretations of ‘domestic’ slavery, arguing that the two approaches are insufficient without each other. Finally, I suggest that, in the nineteenth century at least, African governments were by no means as hostile to, or predatory upon, markets as has often been thought.

Gareth Austin  Professor, International History, The Graduate Institute Geneva, joined the faculty in 2010 from the London School of Economics and Political Science. Prior to his position at the London School of Economics, he lectured at the University of Ghana. His research and teaching interests are in African, comparative and global economic history. His primary research has focused on West Africa, especially Ghana and the pre-colonial kingdom of Asante.

Sponsored by the Center for the Study of Slavery and Justice and the Watson Institute.