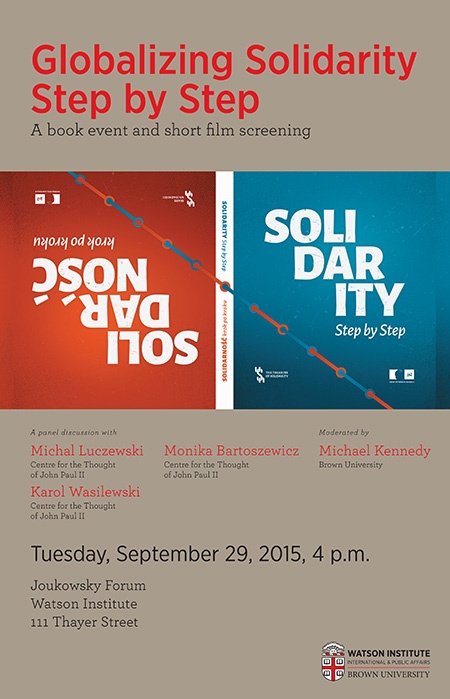 A book event, short film screening, and reception to follow.

In 1980-81, Polish men and women organized a social movement called Solidarity that shook the foundations of communist rule in their country, and laid the groundwork for the emancipation of their nation in 1989. The meaning of that solidarity, however, is not so clear in retrospect for a new generation of Poles, nor is it so obvious in translation as the world yearns for a new way to recognize, and then bear, the burden of others.

In that light, Michał Łuczewski together with Mikołaj Achremczyk, Piotr Czekierda, Małgorzata Fałkowska-Warska, Michał Gawriłow, Paweł Łączkowski and Maria Szymborska assembled to research and then write Solidarity – Step by Step, a book available in both English and in Polish. (Should you wish to read this book in advance, write to Michael_Kennedy@brown.edu to receive an electronic copy). Łuczewski and Karol Wasilewski have also turned their sixth step, “to forgive in truth” into a film entitled “The Father, the Son, and the Friend”.  Six of the book’s authors and filmmakers will discuss their book and show their 30 minute film.

Moderated by Michael D. Kennedy, Professor of Sociology and International and Public Affairs

This event is sponsored by the Watson Institute for International Studies, and made possible by the generous assistance of the Kosciuszko Foundation, the Fetzer Institute and Centre for the Thought of John Paul II.