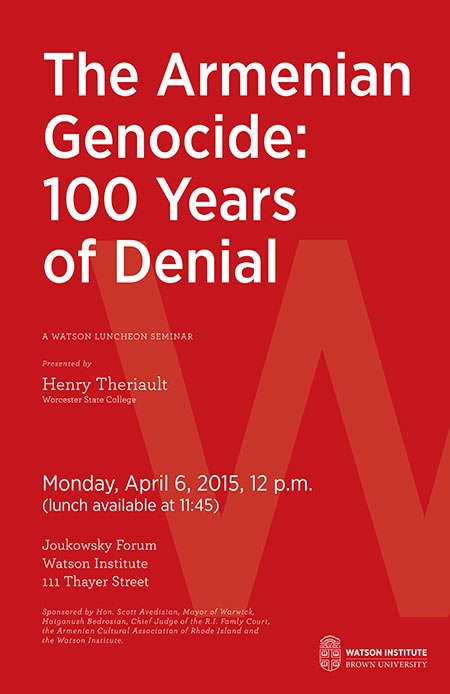 There is a false truism that denial is the final stage of genocide. Denial is usually present in every stage of a genocide and even part of the process before the active phase of the genocide begins. The final stage of a genocide is, actually, “consolidation,” that is, the process by which the harms of genocide inflicted on the victim population and the great benefits accruing to the perpetrators become permanent and irremediable. This can occur when a victim group fades out of existence completely or when the post-genocide status quo becomes so normalized that no reparative change is ever possible again. Denial is a sign that the history of the genocide has yet to be written and repair can occur. Drawing on general theoretical elements as well as features of other cases, this talk will explore the ongoing attempt at consolidation of the 1915 Armenian Genocide by the present-day Turkish government and the importance of reparative justice in thwarting this trend.

Dr. Theriault earned his PhD in philosophy in 1999 from the University of Massachusetts, with a specialization in social and political philosophy. He is currently professor of philosophy at Worcester State College, where he has taught since 1998. From 1999 to 2007, he served as coordinator of the College’s Center for the Study of Human Rights, which included oversight of development of the Dennis Brutus Manuscript Collection. Since 2007, he has served as co-editor-in-chief of the peer-reviewed journal Genocide Studies and Prevention and has been on the Advisory Council of the International Association of Genocide Scholars. His research focuses on philosophical approaches to genocide issues, especially genocide denial and critical thinking and evidence standards, long-term justice, ethical analyses of perpetrator motivations, and the role of violence against women in genocide.

Sponsored by the Hon. Scott Avedisian, Mayor of Warwick, Haiganush Bedrosian, Chief Judge of the Rhode Island Family Court, the Armenian Cultural Association of Rhode Island and the Watson Institute.