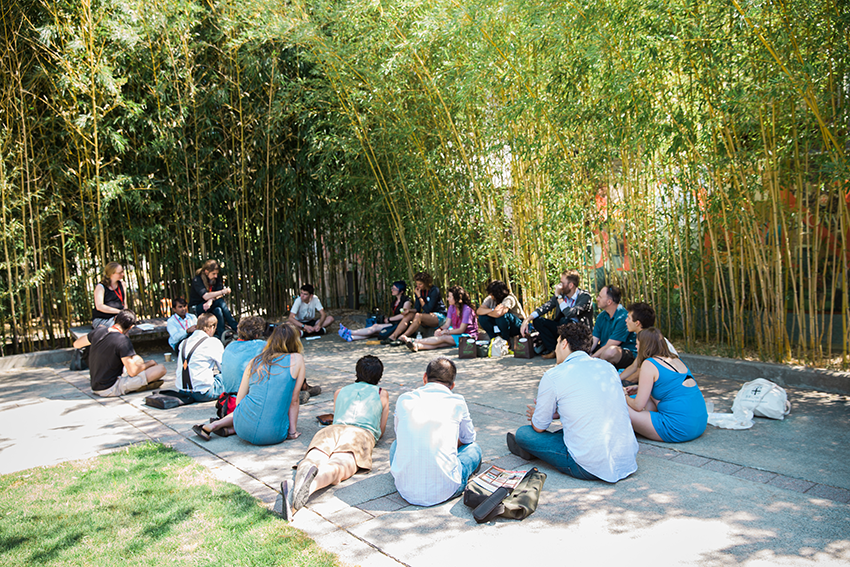 In the context of global warming, issues of access to land and water have been revived at a moment of disappearing land, mass migration, foreclosures, evictions, rent hikes, land grabs, and the privatization of clean water. We believe that now is a vital moment for academics and activists to enter a shared conversation about control and access to land and water, naming the most formidable challenges, the utopian models, and the important historical analogues for our present moment.

This conference began from the conviction that there is an emerging community of land and water-access oriented activists and academics across many fields and subjects of interest – urban and rural, intellectual and technological, retrospective and prospective – who are only starting to discover the possible connections across these boundaries. The conference was designed around opportunities for creating and sharing knowledge in a larger community of academics and activists.We believe that history has lessons to offer about how change is introduced to society.

Garrett Nelson debates the capacity of maps to liberate and to oppress and how cartographers might use their craft to renegotiate rights for more just distributions of land and water. Read here >

Paul Graham Raven discusses struggling against systems that have empowered us to fight them – and why grappling with this contradiction is essential for convincing others to work on issues of access to land and water. Read here >

Christopher England discusses efforts to reinstall a collective right to land and the challenges of governance in reimagined non-proprietary systems. Read here >

Ethan McIntosh addresses the intersectionality of race and environmental concerns and how scholars and grassroots organizations are forming new alliances to address issues of access. Read here >

Camila Bustos reflects on the challenges of and potential for collaborations between academics and organizers. Read here >

John M. Barry is a New York Times best-selling author whose books have won multiple awards. After Hurricane Katrina, the Louisiana congressional delegation asked him to chair a bipartisan working group on flood protection. He was the chief architect of a lawsuit launched in 2013 against Exxon Mobil and 97 other oil, gas, and pipeline companies for the coastal land loss they caused, coined as “The Most Ambitious Environmental Lawsuit Ever” by the New York Times.

Laura Gottesdiener is an award-winning journalist, author and producer. She is the author of A Dream Foreclosed: Black America and the Fight for a Place to Call Home. Her work appears in Rolling Stone, Al Jazeera, Mother Jones, Tom Dispatch, Playboy and other publications. She is currently working as a news producer at the television program Democracy Now! and reporting on energy and water politics across the Americas.

Sudipta Sen, “The River’s Two Bodies: A Brief History of the Purity and Pollution of the Ganga”

Sudipta Sen is an historian of the British Empire and Late Medieval and Modern India at the University of California, Davis. His scholarship covers vast expanses of space and time, from pre-human commons to the Ganges River as a site for exploring myth, historical geography, and ecology.

Watch four of the panels by clicking the links below!

In other historical moments, climate change has disrupted societies (such as the little ice age in Europe).  But this moment of human-generated climate change since the industrial revolution is different, structured by global capitalism and finance.  What lessons can be learned about the influence of climate disruption on particularly vulnerable groups?  What kinds of shocks in terms of farming, food security, water access, mass migration, and the overload of existing resources should we expect, and what, if any, are the models of co-responsibility that can provide a narrative for how to move forward? Panelists included:

Present-day Emergencies and What They Have in Common.

Our conference brought together many individuals who themselves have lived through the experience of foreclosure crises, debt crises, mass migrations, and campaigns of resistance, or who have collected these stories in a spirit of solidarity. This panel offered an opportunity to hear and share those stories, making connections between urban foreclosure crises in Providence and land  grabs in West Africa; between short-distance migration out of Detroit or New Orleans and long-distance migration from Bangladesh. What can we learn from telling these stories together? Who are the new actors who are struggling to transform society and government today? Panelists included:

Sara Berry, Johns Hopkins University, on access to land in Africa and changes in the last 25 years
Daniel Tubb, Yale University, postdoctoral fellow, on gold-based money laundering in the Colombian cocaine market
Rebecca Nedostup, Brown University, on how the state used refugees to grab land in China and Taiwan, and on the strategizing of displacement more generally
Madhuri Karak, The Graduate Center at the City University of New York, on guerilla insurgency, adivasi futures and expropriation in southeastern India
Emily Harris, of Faulkner County Citizens Advisory Group, on the holistic failures of emergency response management
David Ludden, New York University, on global crises of shrimp farming and garment factories in Bangladesh

How are writers, scholars, and advocates thinking about tensions in access to land and water in new ways?  This panel profiled cutting-edge work from researchers and activists rethinking the question of rights, agency, and causality.  Topics included looking at the long term and the short term, thinking about the agency of the natural world itself, remembering and reviving forgotten strategies in the history of land and water struggles, unpacking how energy companies present the story of “nature”, and questioning or revisiting the categories of “land”, “water”, or “rights”.  Panelists included:

Participants discussed the role of technology in renegotiating rights and stewardship of the environment.  Topics included open-source engineering, new systems of governance, innovative technologies to minimize environmental impacts of consumption, cheap technologies for monitoring air and water quality, and speculation about solar and other sustainable futures, centralized under the state or decentralized through the power of many-to-many technology. Panelists included:

Dorn Cox, of Farm Hack, on open-source engineering and the economic support of smallholders
Mark Healey, University of Connecticut, on dams, territory, and utopian schemes for water governance in Argentina
Don Blair, of Public Lab, on the new cheap age of water quality monitoring, solar, and everything else
Timothy Gorman, Cornell University, on the politics of water management infrastructure and salinity control in the Mekong River Delta
David Kinkela, State University of New York, on the history of plastic waste

Co-sponsored by the Watson Institute, the Taubman Center, the History Department, the Humanities Initiative, and Spatial Structures in the Social Sciences.