Screenings of Return to Haifa and Ma’loul Celebrates its Destruction 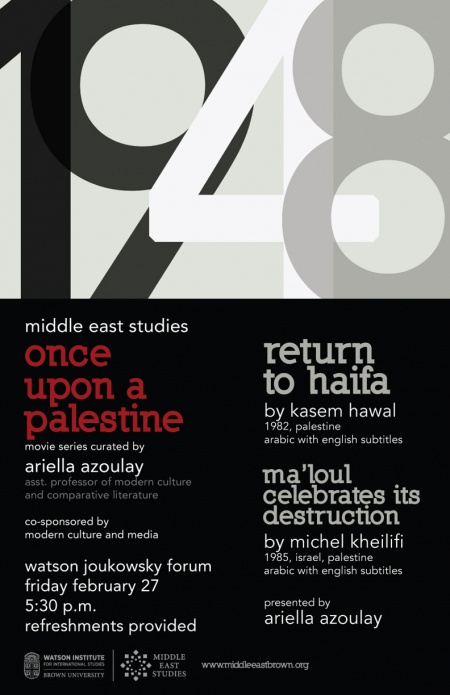 This event is part of “1948 – Once Upon a Palestine”, a film series curated by Ariella Azoulay, Assistant Professor of Comparative Literature and Modern Culture.

About Return to Haifa:

Return to Haifa is based on Kanafani’s novel the plot of which takes place in 1967, when Palestinian refugees living in the newly occupied territories had an opportunity to visit the places from which they had been expelled in 1948. Saeed and Safiyya, a Palestinian couple expelled from Haifa in 1948, visit the home that had been their own. Miriam, a Holocaust survivor and now a Jewish Israeli citizen who lives in their house, lets them in. She moved there with her husband shortly after the Palestinian couple had been uprooted. The Palestinian couple returns to Haifa hoping to discover something about their baby, Khaldun, whom they had left at home that April morning in 1948, not realizing that neither of them would be able to return. The abandoned baby had been adopted by Miriam and her husband who gave him a Hebrew name – Dov, now a soldier in the Israeli army. This tragic encounter depicted by the movie emblematizes the Nakba’s being not only the tragedy of the Palestinian people but also of the Israeli Jews who cannot escape confronting this past and becoming accountable for it.

About Ma’loul Celebrates its Destruction:

Ma’aloul, located 6 kilometers from Nazareth was destroyed in 1948 and its residents were not allowed to return but rather declared by the State “present absentees,” not allowed to have their property back, just as were Palestinians expelled out of the country. This movie makes even more explicit the assumption that the history of Israel cannot be narrated without acknowledging the Nakba, the expulsion of Palestinians and their dispossession. The movie these internally displaced Palestinians’ testimonies about the destruction of their village Ma’aloul and their dispossession and the curricula taught in a history lesson in Arab schools, compelled by the state to teach the Zionist version of the events.