Camila Pastor – Guests of Islam: Conversion and the Institutionalization of Islam in Mexico 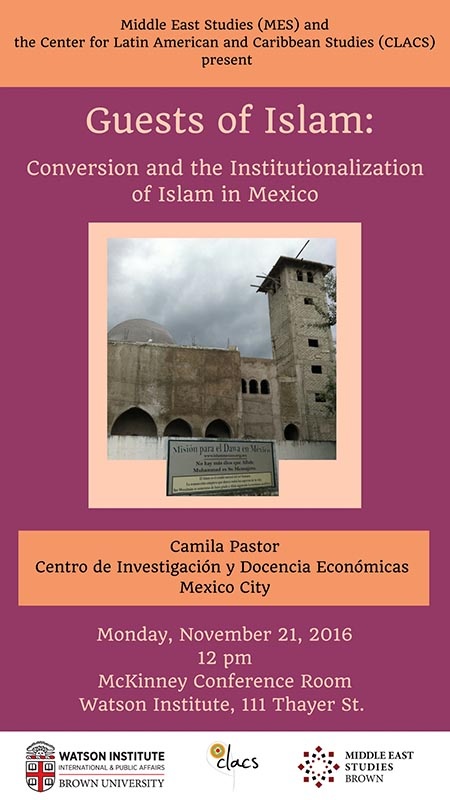 Islam has grown by leaps and bounds in Latin America and among Latinos in the United States in the past three decades. Most of this expansion has happened through conversion and can be traced to the transnational institutionalization of Muslim religious practice in the region. In Mexico, where no mosques existed before the 1980’s, an initial handful of converts who embraced Islam as economic migrants in the United States joined a small historical Lebanese Shia migration and Spanish proselytizing converts in founding spaces of worship. Mosques, musallas and tariqas make Islam a presence in Mexican public space, attracting new conversions and fuelling the growth of Mexican Muslim communities. As these become more numerous and more aware of the diversity of practice and interpretation in Islam, leadership fractures translate into the appropriation of theological alternatives to institutionalize new spaces of worship and dawa- of invitation to the faith. In the past two years, two new Sufi orders and a Shia community have been established in Mexico City and its environs and are already developing headquarters in other large and medium sized urban centers in Mexico. This most recent growth has occurred through the presence of young religious leaders with formative links to Argentinian Islam. In the same period, other proselytizing efforts such as the Turkish Fetullah Güllen Hizmet initiative have also developed a visible and effective presence in Mexico. The institutionalization of diversity has occurred in synergy with the fragmentation of the initial convert communities. As converts acquire religious expertise through contact with fellow Muslims online and in historically Muslim regions where some have received religious education, they increasingly assert a Mexican or a Latino Islam as distinctive and establish institutions mobilising specific theological traditions and socio-demographic profiles.