Critical Conversations Panel – Clinton, Trump, and the Middle East: What is at Stake in the US Elections? 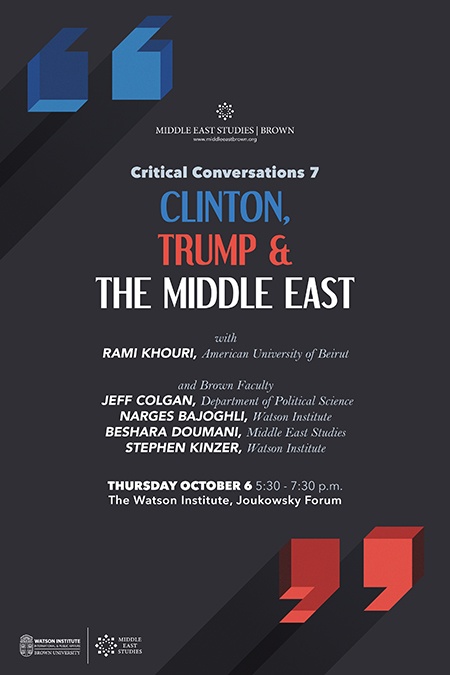 Beshara Doumani will chair the panel and introduce the speakers.

Guest speaker Rami Khouri: "Has the United States learned anything from its 15-year-old non-stop wars in the Middle East?"

Stephen Kinzer: "Comparing the candidates on where they stand on Israel/Palestine, Syria, ISIS, and Libya.

Khouri will be speaking to "Has the United States learned anything from its 15-year-old non-stop wars in the Middle East?"

Rami George Khouri is an internationally syndicated political columnist and book author, and adjunct professor of journalism at the American University of Beirut. He was the first director, and is now a senior fellow, at the Issam Fares Institute for Public Policy and International Affairs at the American University of Beirut, where he is now researching the personal papers and library of the late Anthony Shadid, for a course on Shadid’s journalistic craft and legacy he will teach at AUB and other universities. He has been a nonresident senior fellow at the Kennedy School of Harvard University for the past decade, is the former editor of the Beirut-based Daily Star newspaper and the Jordan Times newspaper in Amman, and has published op-ed articles in the world’s leading newspapers. He was awarded the Pax Christi International Peace Prize for 2006.  He teaches or lectures annually at the American University of Beirut and Northeastern University, and has been a fellow and visiting scholar at Harvard, Mount Holyoke, Princeton, Syracuse, The Fletcher School at Tufts, Northeastern, Denver, Oklahoma, Villanova, and Stanford universities. He has been a member of the Brookings Institution Task Force on US Relations with the Islamic World, and a Fellow of the Palestinian Academic Society for the Study of International Affairs (Arab East Jerusalem). He currently serves on the Joint Advisory Board of the Northwestern University Journalism School in Doha, Qatar, Georgetown University’s Center for Regional and International Studies in Doha, Qatar, and recently completed a four-year term on the International Advisory Council of the International Committee of the Red Cross.  For 18 years he was general manager of Al Kutba, Publishers, in Amman, Jordan, where he also served as a consultant to the Jordanian tourism ministry on biblical archaeological sites. He has hosted programs on archaeology, history and current public affairs on Jordan Television and Radio Jordan, and today comments regularly on Mideast issues in the international media. He has BA and MSc degrees respectively in political science and mass communications from Syracuse University, NY, USA.

This is the seventh of the Critical Conversations series.

There is  wide interest in how the Middle East issue is playing out (or not) in the US presidential election. The idea of CC is to bring together informed people and engage them with a discussion among themselves and with the audience.  It is an informal event whose goal is not “balance” of narratives, but a hard look at the fundamental structures, power relations, and deep politics of the topic at hand. Think of it as an anti-CNN format of this side vs. that side.

Critical Conversation is a once-a-semester panel featuring a keynote speaker with short responses from Brown scholars, followed by an open discussion.

The format is 20 minutes by the guest speaker, and about 5-8 minutes by panel members.